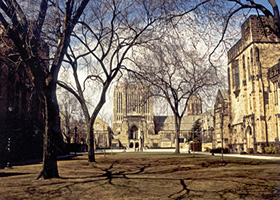 Saw this flagged on one of my favourite blogs, Infectious Greed by economist Paul Kedrosky. He’s pointing the way to PE Hub, a private equity blog, where Dan Primack looks for answers around Yale’s announcement last June that it was increasing its target private equity allocation from 21% to 26%. As private equity losses mounted, many outlets saw the move as “contrarian”. Primack argues that Yale was upping its exposure to manage the risk of capital calls. As he writes:

“The allocation increase was reported yesterday in Yale’s Annual Endowment Report, which you can read here. But Yale also publishes something called the Annual Financial Report, which notes the following:

Under the terms of certain limited partnership and limited liability company agreements for private equity and real estate investments, the University is obligated to remit additional funding periodically as capital calls are exercised. At June 30, 2009, the University had uncalled commitments of approximately $7.6 billion.

For context, Yale’s entire endowment was valued at just $16.3 billion as of June 30. And then it gets worse:

The University has various sources of internal liquidity at its disposal, including cash, cash equivalents and marketable debt and equity securities. If called upon at June 30, 2009, management estimates that it could have liquidated approximately $3.6 billion (unaudited) to meet short-term needs.

In other words: If all of the uncalled commitments came due on July 1, Yale would not even have been able to meet half of them.