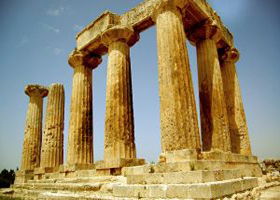 The Greek tragedy is unfolding in surprising ways. The ECB, the IMF and the EU  — “the Troika” — have a lot riding on Greece remaining solvent. Restructuring is four-letter word. Creditors must be paid back, in full – otherwise sovereign debt would be perceived as risky.

Greece has already accepted a three-year €100 billion ($160 billion) bailout. It needs the €12 billion ($17 billion) tranche just to get through the last two weeks of July. And it needs another €110 billion to make it to 2014. As the U.S. Senator once said, pretty soon we’re talking real money.

The Greeks have a lot at stake too. The lenders want deeper budget cuts, real tax collections and a sale of state assets. Right now, Greece is preparing to vote on a five-year plan that would see cuts of €14 billion, tax increases of €14 billion and asset sales of €50 billion.

To put this in context, the €28 budget assumption equals $40 billion – a bit more than the size of the Canadian federal deficit. But Canada’s economy is four times as large as large as Greece’s.

Will that €28 billion cut be enough? Probably not. The market has already factored in a default. The ratings agencies are aching to declare Greece in default, should it have a compulsory rollover of its debt. And, according to Bloomberg, “Credit-default swaps indicate an 82 percent chance Greece will fail to meet its commitments within five years, according to CMA prices. “

Still, it could have a ripple effect. That’s because of the CDSs. While most of the direct exposure to Greece is confined to European Banks,  U.S. banks aren’t off the hook, says Kash Manson, who writes The Street Light blog. They have indirect exposure of $40 billion, in part through CDSs.

But there are rumblings in the CDS market that maybe no one will have to pay out.

Ironically, the European Banking Authority doesn’t include sovereign default as part of its stress tests for banks, as the Bloomberg article notes:

“Politically it’s very difficult for the EBA to assume a sovereign restructuring,” said Richard Barnes, the primary credit analyst for European banks at Standard & Poor’s Ratings Service. “But by requiring the banks to publish their sovereign exposures, investors and other market participants are given the means to adjust the stress-test results however they like.”

But that was so last week. Now the IMF is saying the opposite:

“The IMF Thursday closed the annual two-day meeting on managing public debt, held in Seoul, with a warning to officials to change policies as ‘absolutely safe sovereign debts no longer exist.’

“Jan Brockmeijer, Deputy Director of the Monetary and Capital Markets Department of the IMF, said, ‘The legacy of high public debt and elevated sovereign risk stemming from the crisis carries far reaching implications and challenges for debt managers, as well as for debt markets and investors’. ‘Policy makers need to acknowledge these and should mitigate vulnerabilities by building more robust and resilient sovereign balance sheets,’ he said, according to an IMF statement.”

A day late and a few hundred billion dollars short, as the adage goes.

Has Austerity Gone Too Far?

Why Not Convert Greek Debt to Equity?

On Dec. 15, the industry’s most popular drug benefits conference returned in a virtual format, highlighting the trends and opportunities for Canadian benefits plan sponsors...

In 2020, Canada Life Assurance Co. saw a decrease in the number of benefits plan members making a drug claim, though the costs of those...

Ensuring plan sponsors get value for money from their drug plans

The drug pipeline is full of new medications that may be more effective but may also be more expensive than existing treatments. Although they could...

Nearly a third (29 per cent) of Canadians expressed concern about the impact of rising inflation on their retirement savings, according to a new survey...

Employers should back up mental-health talk with benefits, HR policies: experts

Bhagyashri Pawar was surprised to see a previous employer make headlines last year for its investments in mental-health programs for its staff. “Having worked there, I never...

Since the beginning of the coronavirus pandemic, 43 per cent of institutional investors and wealth managers say they have a more positive view of cryptocurrencies,...