While Canada’s retirement industry is in a state of flux as the country prepares for an enhanced Canada Pension Plan, the market for capital accumulation plans remains a relatively unshakeable and consistent piece of the country’s retirement savings puzzle.

In fact, throughout — and despite — the debates over issues such as the CPP and the Ontario Retirement Pension Plan, most employer-provided plans have continued to gain ground, as evidenced by Benefits Canada’s past CAP suppliers reports. But with a patchwork of supports and programs across the provinces and questions about whether the CPP changes will be enough to respond to the challenge of retirement adequacy, what’s the next step for the industry to ensure a clear path forward? 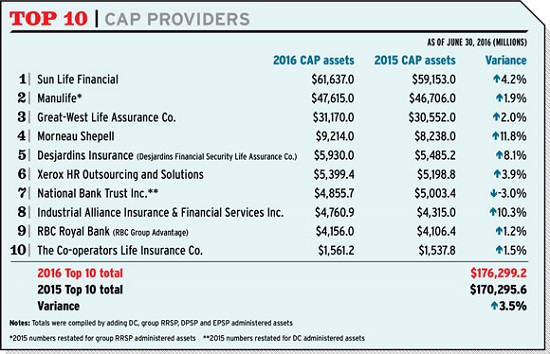 This year, every province, except Quebec, backed the agreement to enhance the CPP. The enhancement will gradually increase contribution rates for both employers and employees to 5.95 per cent, beginning Jan. 1, 2019, and target an income replacement level of 33 per cent, rather than the current 25 per cent.

It’s far too early to tell whether the CPP changes will have an impact on capital accumulation plans, because the full enhancements are still 40 years away, says Tom Mudrinic, principal and consulting actuary in the wealth practice at Xerox HR Services. Still, he notes there could be a slight impact on contribution levels. An employer putting in a new plan and targeting a cost of five per cent of payroll, for instance, might change it to four per cent given the extra cost of the CPP enhancements.

“Some employers might be moving faster than others — for example, employers that have union plans where the bargaining contract expires before 2019,” says Jean-Philippe Provost, leader of Mercer’s retirement practice in Canada. “The CPP will potentially not increase the number of plans or number of individuals covered but it would potentially give them a higher level of replacement ratio on the covered earnings. This is extremely positive for Canadians.”

It will also come down to how employers communicate the changes to employees, says Mudrinic. “If the CPP enhancements are explained as a saviour, then some people may be mistakenly thinking it’s going to solve their retirement problems,” he says. “I think CAP sponsors are going to have some responsibility to explain what the CPP enhancements mean over the long and short term and how their current plan fits into that.”

Enter the VRSP, exit the ORPP

The CPP enhancements put the final nail in the coffin for the ORPP, a program that could have had a radical effect on the industry, says Provost, noting plans such as group registered retirement savings and deferred profit-sharing plans wouldn’t have met the Ontario government’s comparability requirements. “In other words, employers might have had to transition from these types of plans,” he says. “Now, since the CPP is an enhanced structure, we’re not expecting anything that’s radically different.”

Regardless of one’s opinion on the ORPP, it at least spurred action as employers began to make changes to ensure their defined contribution pension plans were compliant, says Jeff Aarssen, senior vice-president of group retirement services at Great-West Life Assurance Co. “The additional conversation and discussions they’ve had will still cause some companies to introduce improvements in their CAP.”

Tom Reid, senior vice-president of group retirement services at Sun Life Financial, also saw an enormous amount of activity from plan sponsors in response to the ORPP but he hasn’t seen the same reaction to the CPP changes. “They don’t really see it as material,” he says. “That’s primarily because the phase-in period is so long, which makes it easier for plan sponsors to digest it and accommodate it within their cost structure going forward.”

On the other hand, Roman Kosarenko, director of pension investments at George Weston Ltd., says the CPP enhancement’s threat to the growth of the CAP industry is no different than it was with the ORPP. “If you assume that the retirement income goal of the company stays the same, they will either cut contributions or redesign their programs.”

Since Quebec has its own version of the CPP, the changes won’t have any impact on that province’s voluntary retirement savings plans. Regardless, Quebec has gone the furthest in trying to improve universal pension access, says Reid, noting activity around VRSP compliance is heating up as the Dec. 31, 2016, deadline approaches for employers with at least 20 employees to offer a plan. “We’re seeing a lot more activity, and I suspect there will be a big rush to get it done in the last several weeks of the year. But starting with the principle of universal access is an important one.”

Provost believes many employers still have questions about the VRSP and isn’t sure it’s the ultimate solution. “For some employers, enhancing or leveraging their group RRSP or the DPSP could potentially be a cheaper platform for them going forward, rather than the VRSP,” he says.

What’s next for the CAP industry?

The CPP changes are still just one of many factors employers are taking into account when looking at their retirement offerings, and there’s no downplaying the issue of retirement inadequacy in Canada, says Brett Marchand, senior vice-president of group retirement solutions at Manulife Financial. “There are really two things that contribute to that inadequacy. On one hand, we have the income that’s available and, on the other hand, the income that’s required. Oftentimes, those two elements don’t add up.

“It’s not because [employees] don’t have the tools, such as workplace retirement programs, CPP, their personal RRSPs, maybe home equity. I just don’t know if many necessarily have the resources to build and execute on a fully holistic plan for themselves. CPP is going to take some pressure off, but there’s still a much broader issue that remains, and we’re going to continue to talk about it as an industry.”

Figures from Benefits Canada’s CAP suppliers reports show the market has been fairly consistent over the last decade, but some industry participants believe the industry would benefit from a number of legislative changes, including automatic enrolment across all CAP offerings and safe-harbour legislation that would protect plan sponsors from future litigation.

For his part, Kosarenko believes the industry should focus on Canada’s tax system. “The whole CAP industry is basically crippled by outdated tax regulations. It’s evolved as a series of small fixes, a gradualist approach,” he says, citing the maze of regulations for the different registered savings programs under Canada’s tax laws.

“The problem, mostly, is there’s no master plan,” he adds.

“We should all try to rise above the fog of war and see the whole landscape of the retirement industry and see that [defined benefit], the way it is, cannot be saved and the way the government approached the CPP expansion does not resolve the primary issues. I think there is a very good healthy core of the CAP industry, and we just need to work to strengthen it.”

Jennifer Paterson is the managing editor of Benefits Canada.


Get a PDF of this article.

2019 CAP Suppliers Report: A look at the RRSP-DPSP combination