In 2009, when Vincent Morin walked through the doors of Air Canada as the vice-president of asset allocation and strategy for its investment division, he faced a tough situation.

The company’s eight defined benefit pension plans, which buy units of a single master trust fund, were facing a $2.6 billion deficit. In the following years, the deficit grew, reaching $4.2 billion in 2012.

As of year-end 2019, all of the airline’s Canadian pension plans are at least 100 per cent funded on a solvency basis.

“When I joined, the mandate was to create a whole new strategy [that was] much more focused on liability-driven investing and reducing the risk coming from the pension plan, because it became a very big enterprise risk management issue at Air Canada,” says Morin.

Back in 2009, the pension plans’ fund was in a traditional portfolio of 60 per cent equities and 40 per cent bonds, all managed externally. Morin and his team led the investment turnaround through many small steps, which included adding fixed income exposure and building an alternative portfolio comprised of real estate, infrastructure, private equity, private debt and other sub-asset classes. The team also implemented a portable alpha — or hedge fund — program to try to generate additional returns on top of the traditional asset classes.

Getting to know
Vincent Morin

What keeps him up at night: The current coronavirus crisis and its unknown short- and long-term impacts on the global economy and asset prices

Outside of the office he can be found: At his cottage, skiing or travelling

In terms of asset mix, the investment fund currently sits at 87.5 per cent fixed income, 10 per cent equities, 20 per cent alternatives and 10 per cent hedge funds, totalling more than 100 per cent because it uses leverage.

“Over time, gradually, I think we did over 30 different steps in de-risking the plan and changing the asset allocation,” he says. “You just cannot move that big a plan. It was a very big boat to turn around.”

With fixed income yields at historic lows and 87.5 per cent of the investment fund’s portfolio invested in the asset class, it pursues a liability-driven investment strategy and is a very active manager. In addition, it keeps a pure separation between alpha and beta, notes Morin. “Beta is the benchmark. It’s built to make sure that there’s good and sound risk management done to match our liabilities’ structure.”

The portfolio is largely comprised of long-term, investment-grade Canadian bonds and doesn’t take big bets on duration, but the fund does arbitrage trades and curve trades globally without taking any foreign currency or high-yield bond risk. For example, if the team believes there’s an interesting point on the curve in France, it will play it, he says. “It will be a long-short position, so there’s no actual exposure to France’s interest rates, but we’ll try to arbitrage that market and be able to capture some return on this.”

By turning Air Canada’s large pension deficit into a surplus, the investment team solved a problem for the company. It also shifted the team responsible for the airline’s pension investments to a new subsidiary called Trans-Canada Capital Inc.

While TCC will continue to manage the investments for Air Canada’s pensioners, it will also make certain funds available to other institutional investors. “We built a great track record over the years, a very different approach than we could see in the market,” says Morin, who is president of TCC.

The team believed it had something to offer to other investors, he adds, noting that, as the fund reduced risk, opening up its investments to others would allow the investment team to continue growing, retain its talent and also diversify Air Canada’s activities.

Read: Is it time for pension funds to rethink their fixed-income allocations?

TCC is offering two fixed income strategies and two hedge fund strategies for institutional investors to buy into, and it plans to expand its offerings.

TCC’s internal hedge fund, launched in February 2019, is its flagship fund. It originally started with the Air Canada investment team using sophisticated transactions to implement its tactical asset allocation. The team was executing these trades using options, volatility contracts and over-the-counter derivatives, says Morin. “At some point, we realized early in the process that what we are managing . . . looks much more like a hedge fund than an actual tactical asset allocation book; better implementation, better diversification, a lot of breadth as well, looking
at different markets.”

Opening up the hedge fund

The investment team has been using an internal hedge fund strategy for the DB plan since 2013, but it launched a formal fund in 2017 so employees could participate with their own assets.

While it wasn’t mandatory for employees to invest, everybody did, since they could access investments — such as complex derivatives transactions with low trading costs — they couldn’t reach as individual investors.

Next, the team focused on portfolio construction for this strategy. Today, it includes quantitative strategies, systematic strategies, fundamental analysis and alternative value transactions. In 2013, the internal hedge fund began operating as a segregated account; in 2017, it became a separate investment vehicle.

In September 2019, TCC launched a fund of hedge funds. “We have a 10 per cent allocation to external hedge funds and we repackaged it to be able to offer that approach to potential external clients.”

The Air Canada pension plans are maturing quickly, with about 60 per cent of liabilities tied to retirees and the DB plans mainly closed to new entrants.

At some point, it will make sense to lock in the benefits for pensioners instead of continuing to take risk, says Morin, noting this influenced the airline’s decision to start its own life insurance company to purchase annuities.

Many pension funds are buying annuities to lock in the pension promise. In fact, according to a report by Willis Towers Watson, Canada’s group annuity market hit $5.2 billion in sales in 2019, up from $4.6 billion in 2018 and $3.7 billion in 2017.

While annuitizing is a natural move for many DB pensions, the Air Canada plans are valued at about $21 billion, making their total size much larger than many plans. Indeed, the airline’s plans were paying out more than $750 million in annual pension payments two years ago; and when looking at the 2018 annuity market, the biggest insurance company active in the space was paying a similar amount in total pension payments, notes Morin.

Read: Is Air Canada’s move to enter annuity market the start of a new pension trend?

As well, despite the active growth in Canada’s annuity market, he believes the Air Canada plans will be difficult to annuitize because of their total size. “The transactions are bigger, but the liabilities have grown over the past few years, and there’s some scarcity as well in the fixed income world to find interesting securities . . . to back those liabilities.”

In addition to market capacity, pricing is also a consideration, notes Morin. “You can purchase a big amount of annuities, but we believe the structure we are proposing will result in a better price for the plans.”
Air Canada has applied to the Office of the Superintendent of Financial Institutions for approval to launch its life insurance company. If approved, the company will operate as a subsidiary of Air Canada with capital seeded by the airline. And TCC will manage assets for the life insurance company, in addition to the assets for the pension plans.

While the mandate would be different for the pension plan assets and the life insurance company assets, fixed income will be core to both, says Morin. 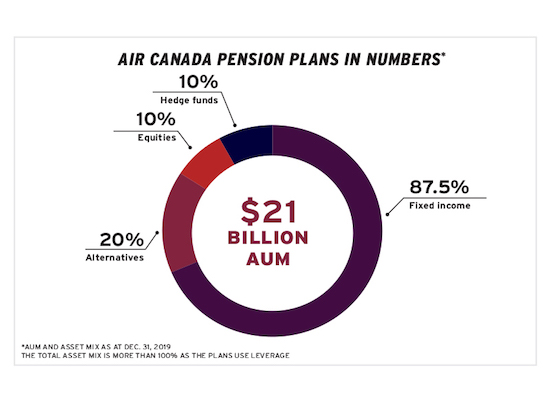 When Desjardins Insurance wanted to determine the value of virtual health care in employer-sponsored benefits plans, it used its own employees as guinea pigs. The...

Embarking on a workplace chronic illness or mental-health strategy is incomplete without factoring in sleep, said Bradley Smith, chief executive officer of Haleo Clinic, during...

Possibly getting rich quick with a few swipes on one’s phone certainly sounds appealing and based on recent statistics and news reports, more and more...

The funding status and confidence of Canadian defined benefit pension plans declined in 2020 amid the coronavirus pandemic and a low interest-rate environment, according to...

Almost half (46 per cent) of Canadian employees said monetary-performance bonuses make them feel most appreciated by an employer, according to a poll done in...