When Gary Timlick joined the Wawanesa Mutual Insurance Co. as its senior vice-president, chief financial officer and pension committee chair, it had no formal investment department. With responsibility for managing corporate investments and pension assets resting solely on Timlick, he began a journey to build up an investment team.

Though it was a relatively new concept in Canada in 2013, the plan made the move that year to hire an outsourced chief investment officer for its Canadian defined benefit plan’s assets. “It was done more in Europe [and the U.S.] than it was in Canada at that particular point in time,” says Timlick.

The move to OCIO was primarily driven by two factors: time-efficiency and the ability to quickly change managers when required. “I think for smaller plans, it’s a very good option,” he adds.

Under the OCIO model, the plan’s management committee prepared the statement of investment policies and procedures and submitted it to the board for approval, says Timlick, noting the OCIO implemented the SIPP once it’s approved. As a result, the plan sponsor didn’t have to go out and search for individual managers and styles. “It was really time-effective and each class of assets always had a number of different managers — three to four.”

When Wawanesa was looking to switch from a particular manager due to staff changes or adjustments in management style, the OCIO could quickly switch and re-assign managers. Internally, this process would have taken up to six months, says Timlick, when accounting for the time required to do a request for proposal, interview candidates and potentially conduct site visits.

The OCIO also allowed the plan to move into new asset classes, including infrastructure and real estate. “We didn’t have any of those assets when we went to the outsourcing model, so within a short period of time, we were able to achieve our new asset allocation targets . . . because they were able to quickly move us into real estate options and into infrastructure, and that would have taken us a long time.”

Getting to know: Gary Timlick

What keeps him up at night: The current market volatility and whether the longest bull run in history will end badly with impacts similar to 2008

Outside of the office he can be found: At his cottage with his family in the summer and on British Columbia’s ski slopes in the winter

Wawanesa’s only reservation for moving to an OCIO model was that it was more expensive than internal management, says Timlick. “But if I look at it from the perspective of smaller pension plans, this is a very good service because smaller plans sometimes don’t have the time or skill set in-house to be able to do the kind of work that’s required to effectively manage the assets.

“This provided a ready-made solution to get to the point of effective investment management very quickly.” And while it may have cost more, the OCIO was able to help access better management fees, adds Timlick. “Now, they wouldn’t disclose those, but we could tell that they were getting better management fees than what we could do as a stand-alone because we’re part of this bigger group.”

Over the past five years, while the OCIO was up and running, Wawanesa built up an internal process and started to take some of the assets back in-house. “That took five years because . . . the people that I hired were busy working on the corporate assets,” says Timlick. “But we’re in a position now where we’re happy with [what] we’ve got going on corporately, and so they’re starting to take back some of the assets.”

The internal investment team now has more time to focus on pension assets in addition to insurance company assets, says Wes Peters, Wawanesa’s current vice-president of investments. “We’re able to lever that to get the scale that we want. It’s not really increasing our governance burden because we are monitoring those investments already and it’s cost-effective. We’re able to piggyback on fee scales, fee schedules for much larger investment — the investment made by the insurance portfolio.

“It has been an evolution, but so far it’s working.”

In 2013, the OCIO managed 100 per cent of the plan’s assets. As of the end of 2018, that’s decreased to 66 per cent. Part of the reason it’s still high is the commitment to longterm investments, says Peters. 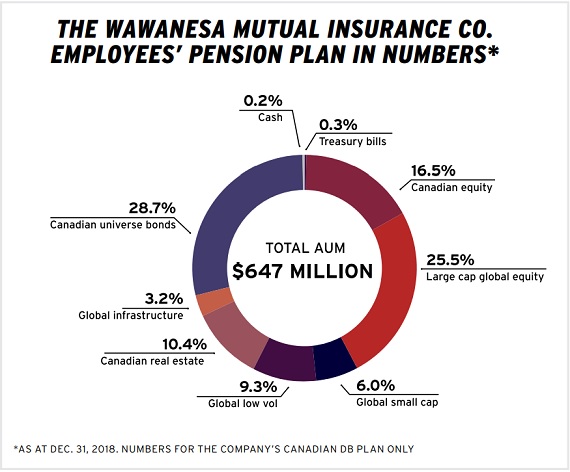 Canada drops to No. 10 in retiree well-being global rankings: report

The federal election is top of mind for many these days, so it’s no surprise Benefits Canada‘s most-read story over the past seven days was...

Eighteen months into the coronavirus pandemic and counting, one of its hottest topics is still up for debate. Jim Stanford, economist and director of the...

In the old days, many employers served up one option for employees: work 9-to-5 in the office. Then the pandemic hit. For the past 18...

When the coronavirus pandemic shook up the investment landscape last spring, Canadian pension funds were also jostled by the shock wave, with the Alberta Investment...

Pandemic changing ‘must have’ perks for U.S. millennial managers: survey

While a re-elected Liberal government may introduce some measures to protect private pension plan members, it’s unlikely to pursue super-priority similar to what was proposed...

With restrictions gradually lifting across the country this summer, employers started to turn their attention to their return to the workplace plans. Now, the fourth...

United Airlines says more than 97 per cent of its U.S.-based employees are fully vaccinated against the coronavirus now that there’s less than a week before a...