In 2016, when Aon’s Calum Mackenzie departed the U.K. for Canada, he left behind a pension industry still reeling from the introduction, a year earlier, of an annual charge cap on defined contribution plan investment funds.

But when Mackenzie, now the consultancy’s Canadian head of investment, recently caught up with a former colleague on the other side of the pond, he discovered the passage of time has taken the edge off the 0.75 per cent cap on investment and management fees for plans with auto-enrolled members. “It was almost forgotten about,” he says. “Everyone complained at the time, but now they seem to have adapted and it isn’t talked about much anymore.”

Settling on a cap

The concept of a cap first gained traction following a 2013 report by the U.K.’s Office of Fair Trading, which concluded that almost 200,000 DC pension plans in the country were shelling out for investment charges in excess of one per cent each year.

Tasked with carrying out an industry-wide consultation, the Department for Work and Pensions drove home the compounding cost of high fees by estimating that a 1.5 per cent annual charge could reduce the overall size of a pension pot by as much as 34 per cent over a working lifetime.

After settling on a cap of 0.75 per cent in March 2014, the DWP gave affected plans just over a year to get used to it, setting an effective deadline of April 2015. “It had a huge impact,” says Joanna Sharples, a U.K.-based principal investment consultant at Aon. The move came at a time of significant growth in the country’s DC market following the 2012 introduction of automatic enrolment, which gradually required employers without pension provisions to auto-enrol all employees into an eligible plan.

Although the charge cap only applies to default funds, that still accounts for the vast majority of auto-enrolled workers, says Sharples. “Many schemes had to change significantly,” she adds, noting that one large plan sponsor’s decision to add indexed products and bonds to bring the fees for its default offering under the cap was typical of the broader market approach.

Fears that the cap could set a new benchmark proved unfounded, according to a 2017 DWP survey, which showed the average charge for members in contract-based DC plans dropped to 0.54 per cent, well below the legislated ceiling. Meanwhile, those in larger trust-based plans paid an average fee of just 0.38 per cent.

Read: What can Canada learn from Britain’s pension reforms?

The same study concluded members of smaller plans — those with fewer than 13 members — were among the biggest beneficiaries of the cap, with fees almost immediately dropping by an average of 0.2 percentage points as administrators scrambled to meet the new requirements.

That same year, following a review of the charge cap, U.K. Pensions Minister Guy Opperman concluded its level should remain unchanged at 0.75 per cent. “The cap is working broadly as intended, helping to drive down member-borne costs, while allowing flexibility to allow asset diversity or tailored services for members and employers,” he said in a statement at the time.

A further review is scheduled for later in 2020, but not everyone will be cheering for the status quo. Stephen Welton, the chief executive officer of the London-based Business Growth Fund — an investor in early stage or venture companies, as well as more established enterprises — fears the “unduly restrictive” implementation of the charge cap has sparked a “race to the bottom in terms of fees.”

U.K. charge cap by the numbers

0.75%
The annual charge cap for default funds imposed in April 2015

0.54%
The average annual charge for contract-based plans in 2017

0.2%
The average percentage point drop in fees for DC plans with 13 or fewer members within a year of the charge cap’s introduction

As a result, plans tend to favour low-cost indexed products and bonds over riskier, more expensive and potentially more lucrative investment options, says Welton. But he warns that an overly passive approach comes with its own risks.

“With an aging population, returns are increasingly important, and when you’re relying on modest growth from conservative investment strategies, it’s likely to leave big shortfalls in pension pots. It’s important that there is more flexibility around this, not just so that people can charge higher fees, but so that schemes can develop broader and more sophisticated investment strategies.”

Canada’s DC market could benefit from its own charge cap modelled on the U.K. version, says Jason Heath, a financial planner at Toronto-based Objective Financial Partners Inc. “I’ve seen fees that are all over the place, without much rhyme or reason to the variation. For me, a cap places a line in the sand and gives companies a clearer idea of what is reasonable for a DC plan, because I’m not sure all employers and [human resources] managers have a sense of what is a fair fee.”

Todd Saulnier, the chair of the Association of Canadian Pension Management’s national policy committee, is also open to discussions. “All the U.K. providers were initially up in arms, claiming it would be horrible and stifle innovation, but I’m not sure it’s played out that way,” he says. “It has definitely cleaned up a lot of the old legacy plans where some fees were in excess of two per cent.”

In addition, Saulnier says Canada’s DC market could benefit from some of the consolidation seen in the U.K., where smaller plans that struggled to meet the cap had the option of folding their assets into master trusts, including the government-backed National Employment Savings Trust.

“Amalgamation is already occurring here on the DB side, and there is an argument for promoting scale on the DC side by getting organizations together to be more strategic in pooling their assets and establishing larger plans,” he says.

But Janice Holman, a principal at Eckler Ltd., says Canada’s disparate pension regulatory regime makes an enforceable DC charge cap effectively impossible. “We have provincial and federal legislation that is not tailored to DC plans, and we have [the Canadian Association of Pension Supervisory Authorities], which provides recommendations for best practices. If you were to have a cap, I’m not sure who would impose it.” 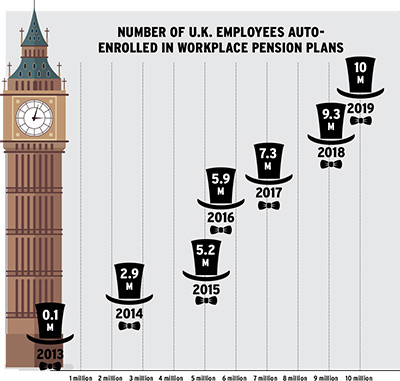 In any case, she says trends in the Canadian market render a hard cap redundant, especially for larger DC plans. “Competitive pressures are driving fees down,” says Holman, noting that not only are plan members becoming more savvy about fees, but plan sponsors are also engaged on the issue — helped along by a series of high-profile U.S. lawsuits over excessive investment charges.

“A cap is one way of helping end users to understand the impact of costs on assets and that awareness is coming across to North America too,” says Mackenzie. “However it’s done, more transparency is a good thing.”

Michael McKiernan is a freelance writer based in St. Catherines, Ont.

Two-fifths (43 per cent) of U.S.-based human resources leaders say workers are having difficulty accessing mental-health care, according to a survey by virtual health care...

Diversity, equity and inclusion initiatives aren’t a new concept for employers — just ask any human resources professional. However, in a changing world marked by...