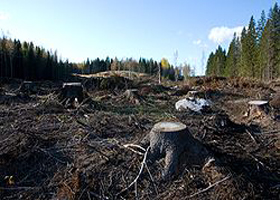 Canada has just released a less-than-austere budget, with revenues climbing remarkably even in the absence of a hard whack of the axe. And this time, unlike 1995, there’s no log-rolling reaper from the credit-rating agencies there to downgrade the debt. (Log-rolling reapers, you ask? Think CDOs in 2006.)

Of course, the situation in the provinces is not quite so sunny, and Federal Finance Minister Jim Flaherty has taken to splitting logs with Ontario over its apparent lack of fiscal restraint. Until Prime Minister Stephen Harper took him to the woodshed. The log-rolling reapers haven’t quite made up their minds: up, down or sideways.

Would that other countries could have these dramas play out so easily. Greece, Ireland and Portugal, those stories are well-known, though so far only Greece’s creditors have taken a haircut. But all of the countries’ residents are wearing hair shirts. And it looks likely that Spain will follow, and even the Netherlands, who just lost a prime minister over spending cuts.

But many economic commentators think that hack jobs don’t work. The bald soprano may remain a soprano, yes, but also bald.

“Citizens rightly feel that sacrifices do not deliver the promised results. Even the IMF, long criticised for its stern advocacy of procyclical austerity, is now asking Eurozone nations that can to ‘go slow’ Among academics, paper after paper produces estimates of the multiplier that differ by huge amounts, even by signs, showing how little we know (see the Vox Debate ‘Has austerity gone too far?’). When the standard errors are bigger than the estimates, we are left to casual empiricism and lessons from history, both of which show that procyclical fiscal policies are bad, especially when monetary policy is not available any more.”

What’s worse, however, is the expectation that meeting budget targets in the short-term has any impact on long-term growth. Instead, he argues: “A large number of public debts are above or close to 90-100% of GDP. Unless they are restructured in a way that sharply reduces their values, primary surpluses will be needed to bring debts down to more comfortable levels, clearly below 60%. This will take decades, not years.

–The current emphasis on achieving some nominal deficit targets in 2013 and 2014 may have some legal or symbolic justification.–

From an economic viewpoint, it is simplistic nonsense.”

How simplistic? Well, Brad DeLong, a UC Berkeley professor prominent among neo-Keynesians, takes up the bond vigilantes’ argument, namely that investors, fearful of inflation, will bid down the credits of heavily indebted Eurozone sovereigns. But, he counters, “unless we believe that the long-term real borrowing costs for western Europe as a whole will be more than 5% per year – that nominal borrowing costs will be more than 7% year – spending cuts now to reduce the deficit are likely to erode rather than bolster the overall fiscal situation. They damage rather than restore confidence. They raise rather than lower the riskiness of the outstanding bond stock. And so they reduce rather than raise employment and production in the economy.”

What he concludes is that “spending cuts now to lay sacrifices on the altar of credibility in the hope of improving confidence and reducing the riskiness of the outstanding bond stock? No. The arithmetic simply goes the wrong way – unless you believe that Eurozone nominal bond yields will soon normalize to levels above 7% per year.”

So, as Jon van Reenen writes, “in some sense the obsession over the fiscal stance is a distraction from the more fundamental question of how to establish sustainable long-run growth. Structural reforms to increase competition in labour and product markets are one way of helping here. It would be a ‘waste of a good crisis’ to fail to enact needed structural reform as Mario Monti is attempting to do in Italy by reducing barriers to entry and exit. More generally, attention needs to be refocused on these longer-run issues and this motivated setting up the LSE Growth Commission co-chaired by Tim Besley and me.”

Still, the medium term matters, van Reenen, a professor of economics at the London

School of Economics,  notes: “There is no dispute that the escalating public deficit and debt position following the financial crisis of 2008–09 required a credible medium-term fiscal consolidation plan. This was also an opportunity to tackle longer-run issues such as entitlement reform (e.g., pensions), which could help lock-in expectations about the credibility of debt reduction. Some countries like the US have notably failed on this score. But European countries have generally adopted such a programme. The issue is, now that growth is stalling should these plans be adjusted in the light of the new circumstances?”

Which poses the fateful question: tax hikes, spending cuts, or both? “I broadly agree that we should be as much concerned with the composition of consolidation as we are with the level,” van Reenen writes. “However I am unconvinced that the ‘taxes rise bad, spending cuts good’ mantra has sound theoretical or empirical basis. It seems likely that we need a combination of both, especially as they blend into each other when we think.”

Weed-whacking won’t immediately produce a forest, one might argue, not when the tallest trees have already been chopped down, harvested and chipped. New growth yes, maybe even a selective burn. Clear-cutting, perhaps not so much.  (But someone will discover a long/short trade here.)