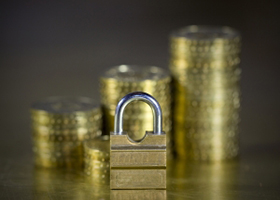 Quick: what asset is considered safe, pays no interest, is bulky to carry and incurs storage costs?

Bank of New York Mellon is now set to charge institutional investors for holding more than $50 million in cash accounts. The initial tariff is 13 basis, with higher fees if the yield on one-month T-bills turns negative.

That’s not an improbability. At the same time BNYMellon was making its move, one-month T-bills dipped below zero.

It’s not just the U.S. that seems to suffer from too much cash and nowhere to put it. Swiss interbank rates are flirting with negative interest. That’s because the Swiss central bank has opened the taps to the franc from overheating as investors seek safe foreign havens.

In fact, writers at the Financial Times have already christened the Swiss franc a “Giffen” good.  The concept of a Giffen good stems from a Victorian era observation that, as prices rise, people are unwilling to choose a  substitute for a good now become pricier, but in fact demanded more of the pricier good – and not, as with conspicuous consumption, because it had prestige value (That would be a Veblen-Vuitton good, one might argue). Instead, Giffen goods are of notably inferior value. Finally, there is no close substitute, even as prices rise. Giffen used the example of bread versus meat. As the price of bread rose, people cut back on meat. Today we might think of potato chips and soda versus a vegan diet.

But why Giffen goods in asset markets? It’s the ultimate in flight to safety. The more people seek capital preservation, the more people seek the risk-free asset, the inferior the value of that asset (at least to rational investors who are not hindered by illiquidity).

Money has an inferior value? Compared to long-term bonds and dividend growth stocks, it does, at least when it comes to yield. At least you get paid to hold a riskier asset.

That’s the oddity of QE2 and of ZIRP. The more the U.S. Federal Reserve tries to cheapen the value of cash, whether through quantitative easing or zero interest payments, the more they clamour for it. The more the Fed wants to inflate, the more investors deflate.

Risk-taking has its risks – and the occasional rewards. Taking no risk, however seems not only to attract no rewards, but to incur a penalty. One might argue the, that modern finance is really a confidence game –which takes us back to Keynes rather than Friedman, animal spirits versus anchored inflation expectations.