Organizational transformation consultant Anne Pertus faced a major shift in her own life after a diagnosis of Type 2 diabetes put her on a new diet and lifestyle regimen that required constant finger pricking to monitor her sugar levels. But instead of being in control of her disease, Pertus felt like it controlled her. That all changed when she switched to the FreeStyle Lib re system, which uses a sensor, on a compatible smartphone* or a reader to monitor glucose without finger pricking.† 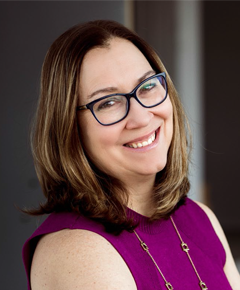 “ My insulin has gone down by two-thirds over the last two years. I’m not stressed anymore. I’m in control.”

When did you find out that you have Type 2 diabetes?

It was June 8, 2016. It wasn’t a huge shock coming out of left field. My father has diabeties. I’m fairly fit and active but I had been sick, and just before Christmas the year before I was diagnosed as pre-diabetic. My husband was with me on the day I was diagnosed with diabetes, and we looked at each other and said, okay, let’s deal with it.

How did you initially react to your new reality, which would involve the disruption of constant fingerpricking for glucose monitoring?

I was familiar with the fact that my father had to prick his finger frequently to check his glucose level. I grew up in a house that ate healthy, where there was no sugar, no pasta. And I’m pretty rigorous—in fact one of my best friends said to me, don’t take this the wrong way but if there’s anybody that can handle diabetes it’s you. What I didn’t comprehend at a deeper level was just how much was involved in managing diabetes. I couldn’t figure out why I was getting high numbers even when I thought I was doing everything right. I quickly realized that even though I grew up with a father who had diabetes, I did not really appreciate what was involved.

What were your concerns in particular?

I wasn’t overly concerned at first because I viewed it as a chronic disease that I could manage. But I had to find my own endocrinologist and in Quebec it’s not easy to find a doctor, let alone a specialist. When I did find an endocrinologist, I was given a prescription and told to go the pharmacy and get a glucometer. That helped me see where my sugar levels were but I still didn’t know what was going on because I had no way of closely monitoring the correlation between what I was putting in my mouth and the way I was feeling.

Can you give examples of how this has affected your work and personal life?

I was pricking my finger before every meal, and maybe up to 15 times a day in total. Every time I got in my car to drive to a client, I pricked my finger because my father has had car accidents from his sugar levels being out of control, and I didn’t want the same thing happening to me. But even though I was finger pricking so many times a day, I was still struggling. When I was in meetings, I had no idea if I was going into a low. If it was getting close to a mealtime I’d start wondering where my sugar level was at. I can also remember two nights in a row when I was jolted awake in the middle of the night because my sugar was so low. That felt terrible because all I could think about was, gosh I need to get up and put food in my mouth, but I can’t even stand up properly to do that.

You’re an organizational transformation consultant who’s frequently in front of clients. Have you ever had to leave a meeting to check your glucose?

Yes, on more than one occasion I did have to excuse myself because I had to prick my finger and deal with my diabetes. That can get stressful because I’m trying to focus on the meeting but in the back of my mind, I’m wondering why I’m feeling a certain way and I know I have to leave and disrupt the flow of the meeting.

How has your diabetes affected the other people in your life, like your husband and co-workers?

They have all been so understanding but I imagine it was hard for them to see me struggling with my diabetes. Before I had my diabetes under control, there were times at work when I was so exhausted that I had to go home and have a nap in the middle of the day. Travelling was stressful for both me and my husband. I had to think about what food I could bring across the border and if we were in line at the airport and I started to feel a certain way, my husband and I would worry.

How long have you been using the FreeStyle Libre flash glucose monitoring system? What kind of difference has this made to the way you manage your diabetes?

I got my FreeStyle Libre system inNovember 2017. In consultation with my Health Care team, my insulin has gone down by two-thirds over the last two years. That’s because I’m able to better monitor my glucose and I’m no longer afraid of getting low. If I see that my sugar level is going down, I just discreetly have a little snack or take a glucose pill and I’m fine.

I’m not stressed anymore. I’m in control. I know where I’m at. In meetings, my FreeStyle Libre reader sits on the desk or boardroom table. When I need to, I just pick up the reader and pass it over the sensor on my arm. My clients think it’s cool. In the past whenever I was in front of people and I knew that there wouldn’t be a break for some time, I’d be worried that I might be in trouble.

What diet, exercise or other lifestyle changes have you made as a result of switching from finger-pricking† to the FreeStyle Libre system?

Six months after I started using FreeStyle Libre system I switched to a diet of low carbs and high healthy fats. As I was making this change, I was able to closely monitor and analyze what was going on with my sugar levels. That allowed me to adjust the way I’m eating based on very clear and precise visuals of what happens to my sugar when I eat certain foods. Without the FreeStyle Libre system, I wouldn’t know if my new way of eating was working for me.

I understand you’re an active Nordic walker. How does using FreeStyle Libre help you with this activity?

I do Nordic walking with a group and we do intervals where we stop to do exercises such as quads. Before the FreeStyle Libre system I’d miss out on these exercises because I had to prick my finger.† Sometimes in the winter I couldn’t even get any blood out because my fingers were frozen. The FreeStyle Libre system has been a real game changer for me.

How easy was it for you to get access to the FreeStyle Libre system?

What do you want other diabetes patients to know about the FreeStyle Libre system?

With the convenience and the peace of mind it delivers by allowing me to control my sugar and feel good, the FreeStyle Libre system makes a hundred per cent sense. You don’t get a day off from diabetes. It’s something you need to manage every day. When you have the additional burden of having to prick† your finger so many times a day, it can really disrupt your life. Not to mention the discomfort— my fingers were sore all the time. The FreeStyle Libre system changed all that for me.

* The FreeStyle LibreLink app is compatible with Near-field Communication (NFC) enabled iPhone 7 and higher running iOS 11 or higher;
† A finger prick test using a blood glucose meter is required during times of rapidly changing glucose levels when interstitial fluid glucose levels may not accurately reflect blood glucose levels or if hypoglycaemia or impending hypoglycaemia is reported by the system or when symptoms do not match the system readings;
‡ For residents of Quebec, the following three criteria must be met: intensive insulin therapy, frequent or severe hypoglycemia problems and the necessity of glycemia self-monitoring a minimum of eight times per day. The FreeStyle Libre flash glucose monitoring system is indicated for measuring interstitial fluid glucose levels in adults aged 18 years and older with diabetes mellitus. Always read and follow the label/insert.
This article was paid for by Abbott Diabetes Care, a manufacturer of diabetes care products in Canada. This is an actual testimonial of a FreeStyle Libre system user and Abbott has consent to use their story. Consent is on file with Abbott. ADC-18760