Marcy Gallant has long dealt with misconceptions about alopecia areata, an autoimmune condition that causes the immune system to attack hair follicles and results in hair loss. Now, Gallant helps educate Canadians about alopecia through her work as an online advocate. She wants employers to know that everyone’s alopecia looks different and that anyone—men, women and children—can get the condition at any time. 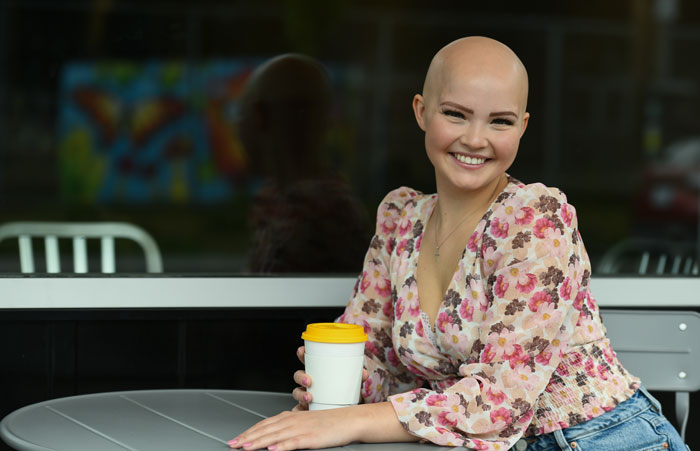 Alopecia areata affects roughly 2% of Canadians and creates daily challenges for 85% of those living with the condition— including struggling with their mental health and dealing with others’ reactions. Nearly half of these patients report missing work due to alopecia areata.

When were you diagnosed with alopecia areata? What are some of your symptoms?

I was diagnosed when I was about six. It was very mild at the start and the only symptom I had was very minimal hair loss at the back of my head. My alopecia areata developed to alopecia universalis, a more severe type that comes with complete hair loss when I was 18 years old. I feel healthy, but alopecia is an autoimmune condition. Once you have one autoimmune deficiency, you’re prone to others. I now also have eczema, rosacea and psoriasis.

How has alopecia affected your quality of life?

Alopecia areata caused so much stress, anxiety and discomfort in my younger years when I was undergoing hair loss while trying to figure out who I was. I was completely antisocial for a while; the thought of meeting new people terrified me and I dealt with bullying. It also affected my physical health when I was trying different treatment options that I didn’t react well to. I was struggling with identity issues and body positivity issues—all the things tweens go through, but with a whole other layer added. I was desperate and on constant edge because there was so much unknown about alopecia areata.

What treatments have you tried and how have they helped?

I started with noninvasive steroid creams and ointments, which only helped with minimal hair loss but stopped working quickly. When I got older, I began steroid injections. As a child, receiving that many injections was traumatizing and I didn’t see much improvement. When I was a tween, I tried a chemotherapeutic treatment. It produced a significant amount of hair, but it was the worst time of my life. I was constantly sick and dealing with so many side effects. I retried steroid injections at 17 and 90% of my hair grew back—but, unfortunately, it stopped working. That was when I realized I’d done my fair share of treatments and needed to stop and live the best life I could.

How important would new treatment options be for alopecia areata?

It’s about time alopecia areata receives the attention it deserves because it affects so many individuals around the world. New treatments would be ideal, as we’ve been put through so many trial-and-error treatments. Until now, alopecia treatments have been medications that were originally used for other conditions. We deserve more of a chance.

What would you like employers to know about alopecia areata?

The best thing employers can do is educate themselves. I don’t mind explaining [my condition] when people ask, but many others aren’t comfortable being asked about it or are selective about who they talk to and what they share. In this context, it would be helpful for employers to ask their employees if they’re undergoing treatments so they can be aware of potential side effects that might affect employees at work. They can also ask how comfortable the employees feel being asked about it and if they want their employer to pass along any information to their colleagues.

What would you tell your younger self about living with alopecia areata?

I’d reassure my younger self that there’s an incredible community out there of people just like me and you’re not alone. I was given so much purpose through having this condition and I’m playing a part in changing society’s perceptions of beauty standards. I’d tell my younger self it will be an uphill battle, but you will make it out and be more resilient than ever.