Susan loved her work as a physician, but by November 2016 she could literally no longer stand to do her job. The pain in her feet and right knee had become relentless; walking and even standing had become excruciating. Drug compatibility testing, also known as pharmacogenetic testing, proved to be the turning point in her long journey toward recovery. 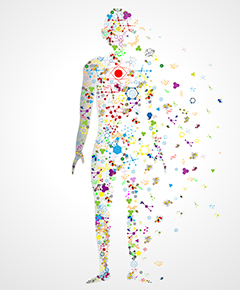 “ I truly believe drug compatibility testing can be the key to setting the course for quicker, more successful, healing.”

My perspective is unique because I am a business owner, a patient and a healthcare professional. My advice for all three groups is the same: drug compatibility testing should be a critical part of determining treatment for people on long-term disability, and ideally before disability leave.

Tell us more about the pain you experienced.

The official diagnosis was multiple lower extremity fractures, which began when pain in my right leg turned out to be a lower leg fracture. Then I began getting fractures in my feet, and eventually the ligaments in my left ankle became completely torn. As a physician, I am on my feet for most of the day; that became impossible and I had no choice but to go on long-term disability leave. The pain was brutal—even today when I think about it, I feel sick to my stomach.

What was the initial treatment?

Mainly rest, to give my bones time to heal. I had to use a walker to get around and I wore a knee brace and special cushioned shoes. I used only non-prescription pain relief medication, which was crazy when I look back at it because it really could not have done much for that level of pain. But my doctor did not want to prescribe opioids, and I agreed. I also began seeing a rehabilitation physician.

I was on disability leave for six months, and our first priority was to figure out why my bones were breaking. We learned that although my bone density was normal, my bone deposition, or the overall quality of my bones, had become poor. From there, we made the connection to a drug that I had been taking for 12 years to treat my rheumatoid arthritis. The drug can reduce the absorption of folic acid, an important mineral for building bone. In my case, the drop in absorption was extreme.

How did treatment evolve, once you had an idea of the cause of your injuries?

I started taking a drug to improve my bone quality. It worked, but it took a long time and we couldn’t figure out why I was healing so slowly. And we still had to determine which drug to use for my rheumatoid arthritis to replace the drug that had likely caused my poor bone quality. By this time, I had returned to work on a part-time basis, but I felt like my healing had barely begun.

How did drug compatibility testing enter the picture?

My husband, who works in the health insurance industry, told me about it. I was able to order a testing kit at a much lower cost, due to a discount from my RBC Insurance® benefit plan. This testing was the turning point in my healing. The test not only looked at my body’s compatibility to certain drugs—in my case, we were most interested in anti-inflammatories for my arthritis—but it also tested how my body absorbs minerals and nutrients. We learned that I absorb only 30 percent of folic acid naturally, which had probably dropped down to zero while I was taking that drug for rheumatoid arthritis. No wonder my bones were breaking. The test results also indicated which anti-inflammatory drug would likely work best in my body.

Thanks to the test results, I changed my nutrition supplementation and my doctor changed my anti-inflammatory medication. Almost immediately, I felt like I was truly healing. It was not long before I was back to working full time.

Were you concerned about the procedure itself?

The process is easy. The kit comes to your home through the mail, you spit a little saliva into a small container then send the container back to the supplier. There are no needles, and you don’t have to give a blood sample. I got the results about three weeks later, and I had given consent for the results to go directly to my physician as well.

What advice would you give to employers about pharmacogenetic testing? To employees?

My perspective is unique because I am a business owner, a patient and a healthcare professional. My advice for all three groups is the same: drug compatibility testing should be a critical part of determining treatment for people on long-term disability, and ideally before disability leave.

It took me two years to heal, starting with six months on disability leave. It’s important to understand that the leave was not only a huge financial loss, but it aged me. I became dependent on others, I gained weight, and I felt terrible physically and emotionally. I don’t think I’m alone in that experience. We should do whatever we can to prevent this. I truly believe drug compatibility testing can be the key to setting the course for quicker, more successful, healing.