Over the last several years, a small group of faculty members at the University of British Columbia has been calling on its pension plan’s board of trustees to consider divesting from fossil fuels.

As support for divestment grew, the board of the UBC faculty pension plan, which is defined contribution, agreed to assess whether there was sufficient member interest to make a change, says Orla Cousineau, executive director of pensions for the university’s staff and faculty pension plans. She notes it wouldn’t be prudent to add a fund without enough assets in it and it would be expensive.

In March 2019, the board surveyed plan members on whether they’d be interested in a fossil fuel-free fund. “When we did the survey, we didn’t just ask them, ‘Are you interested?’ We also said, ‘If such a fund was offered, how much money out of your existing account balance would you be prepared to transfer into the new fund option . . . in terms of your existing assets and what percentage of your future contributions?’”

The survey found resounding support for a new fund, says Cousineau, with 61 per cent of respondents voting in favour. As a result, the faculty board began a journey of analysis and due diligence. It retained a lawyer to consider if offering a fossil fuel-free option was consistent with its fiduciary obligation and engaged a third party to perform an investment analysis and determine if options were available that offered returns comparable to the existing default, which is a balanced fund. 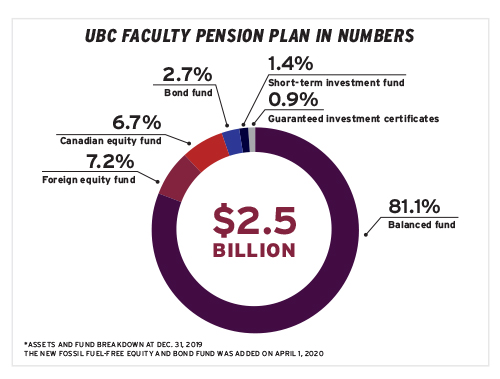 After analysis was complete, the board concluded it could move ahead with offering a new fossil fuel-free fund and identified a manager, she says, noting it created a fund that consists of Canadian and global equity and fixed income.

Compared to the default fund, the new offering doesn’t include real estate. It’s starting with a small asset base, so liquidity issues could arise if real estate was offered, says Cousineau. But longer term, she expects real estate will be added. The default fund is also more diversified, with 10 different managers, as opposed to the new fund, which has one manager.

Getting to know
Orla Cousineau

What keeps her up at night: How different the world will look coming out of the coronavirus crisis and the impact on investments

Outside of the office she can be found: Running, biking or skiing

The board was very careful when communicating the new option to plan members. “The board doesn’t believe this is necessarily the best investment option. They think the balanced fund is the preferred choice.”

However, it introduced the fund because the plan’s members, who take on the investment risk, wanted a fossil fuel-free or low-carbon option, says Cousineau. The board clearly communicated that the same historical performance information available for the default fund isn’t available for the new fund and that the performance will look different as well.

In its member communications, the plan sponsor also explained it already uses managers that integrate environmental, social and governance factors into their investment processes and highlighted the difference between ESG and fossil-fuel free. “And then we did the survey. And then, once again, we communicated again on an ongoing basis about the differences between these terms, so that they were making informed, educated decisions.”

Even amid volatility caused by the coronavirus crisis, no one has pulled out, says Cousineau. Indeed, since going live, plan members have continued to transfer assets to the fund. “But I think, if it wasn’t for the volatility, we’d be at a much bigger number today because I think there are . . . people that are kind of hanging back, saying, ‘I don’t want to transfer at a low point. I’ll wait and then move.’”