The world may be more digital than ever, but a physical presence can still sometimes make the difference between success and failure for pension plans

For the OPSEU Pension Trust, establishing offices abroad was a logical step. Its private markets group, which is based in Toronto, was undertaking a lot of global investment activity, so the business case for having boots on the ground included cost savings and increased efficiency.

Since 2006, the pension fund has opened two offices outside of Canada — one in London, England and the other in Sydney, Australia. For both locations, hiring local talent is a big part of achieving their objectives.

“We always had a vision that we were going to start our offices with people that already worked within the organization and then hire locally from there,” says McCormick. “The strategy or ethos of that was really to try and open an office that had somebody that was an existing team member, so you can infuse the culture of the organization into the foreign office, but then also in the benefit of hiring locals from there and benefit from their local relationship.”

However, not every pension plan has the ability to establish offices around the world. Even plans with significant scale and billions to spend boast only a handful of foreign outposts. 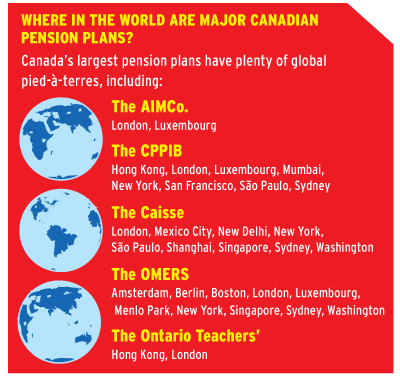 But, while it’s a major undertaking to set up in Hong Kong, Paris or São Paulo, Canadian plans are looking, increasingly, to far-flung regions for their asset allocations, so it makes sense they’re on the ground to oversee these investments.

What edge does a physical presence offer a pension fund and what should they consider when looking at setting up shop abroad?

Getting to know you

As Canadian pension funds continue to move their dollars from public to private equity, they’re also increasing their investments in foreign companies. Since the beginning of 2020, the British Columbia Investment Management Corp. has bought a stake in a U.K. investment analytics provider, the Ontario Municipal Employees Retirement System has invested in a German fibre technology company and the Ontario Teachers’ Pension Plan has led a round of financing for a European digital health-care provider.

When it comes to due diligence on investments, advancements in technology are allowing more sophisticated analysis than ever before, but they’re not a substitute for an actual presence in the country where a company — whether it’s public or private — is located, says Michael Peck, senior vice-president and head of institutional at Invesco Canada.

“People always think everything is being done on the screen nowadays. That’s still not the case. The screens are helpful, but I think . . . the best outcomes are when you can leverage what you see on a computer screen with what you can see, feel and touch live and in person.”

Indeed, there’s only so much a research analyst can achieve over the phone, says Jeff Masom, global head of institutional distribution at RBC Global Asset Management. “There’s so much to get from that face-to-face meeting. If you’ve done your homework, you know if management is following through on their words with action, and so you’ve got a line of questions coming into the meeting and you can certainly read body language. . . . You can pick up on tone moreso.”

Pension funds outside of Canada are also diversifying their positions geographically. Increasingly, pensions plans from growth markets like Latin America and the Middle East are making up the world’s largest institutional investors.

In a 2019 survey, Mercer found pension plans in Africa, Asia and Latin America hold an average of 49% of their portfolios in foreign equities and 23% in foreign fixed income. Last year, Colombia, Japan, Malaysia, South Korea and Taiwan saw the biggest growth in allocations to these foreign assets, with Colombia boosted by loosened legislation on foreign asset ownership.

Company culture is also an essential part of an adequate analysis, he says. When it comes to investing in a company, a survey of its employees can be a useful tool, but following that up with a visit to the organization can add to the power of that investigation. “When you get a visual on that to confirm, you could perhaps meet with different parts of the organization,” says Peck. “You’re not meeting with all parts, but . . . you’re also able to confirm what a survey may have said or maybe draw some questions on the flip side.”

Read: Why are institutional investors ramping up allocations to private equity?

In addition to company culture, there are often cultural reasons why a certain company conducts business the way it does, says Marc Cevey, chief executive officer of HSBC Global Asset Management Canada Ltd.

It’s also important to understand how the consumers in a country behave, especially when analyzing businesses that primarily have exposure to their own domestic markets, he adds. “Understanding the culture of a single country is understanding the consumer. That’s the single biggest aspect. Consumers spend money differently in various economies and consumption is increasingly becoming the single largest driver of economic activity.”

In China, for instance, that activity has historically been focused on exports and investments, he says, noting 50 per cent of the country’s gross domestic product is driven by consumer spending — and it’s growing. “It’s also true for India, Indonesia, Malaysia, Thailand. So that is the biggest engine of economic activity and, therefore, understanding consumer patterns and preferences in those individual countries is critical to understanding the potential return on asset.”

Outside of private equities, other real assets, such as infrastructure and real estate, highlight the importance of a physical presence, helping pension funds analyze a potential acquisition in a myriad of ways.

“We’re doing a lot of non-domestic real estate,” says Peck. “At the end of the day, real estate is a very, very local business. So for us, we know that we need to have New Yorkers in New York, right? You need to have Parisians in Paris and Singaporeans in Singapore. It doesn’t work in that type of a market to fly people in and fly people out.”

To get a scale for just how different one street corner can be from another in the same city, Peck suggests investors consider their home town and its intricacies in value from neighbourhood to neighbourhood. “You know how different even the little submarkets are within Toronto. On a global real estate perspective, that remains the case.”

As an investment manager, it’s important to be closer with investor clients, he adds, experiencing things with them and helping them out right where they are. “From an investment perspective, having those boots on the ground really makes a big difference.”

While a pension fund’s physical presence is integral to securing a better vantage point for analyzing the key components of a potential real estate investment, the asset class can prove tricky from a tax perspective.

“Obviously, it all depends on the products that you’re investing in,” says Benoit Labrosse, vice-president of asset and risk management at Morneau Shepell Ltd. “But real estate laws are very complex across all countries. They are very specific to each of the countries depending on your country of residence, depending on a whole bunch of things.”

Indeed, local tax laws are one of countless logistical considerations for investors. Another area is compliance, as pension funds could easily find themselves on the wrong end of a regulation in another country, says Peck. “When you are going outside of your borders, sometimes you want to pay a little bit more attention to corporate governance and compliance programs.”

For example, when a fund is based in a different jurisdiction, it’s important to make sure its investment manager is licensed to operate in Canada, he says. In addition, it’s important for Canadian pension plans to become familiar with any potential pitfalls when searching for foreign managers to do business with.

• While it’s relatively simple for large pension funds to buy highly liquid foreign investments like public equities, not everything about a company can be analyzed without a physical visit.

• In making significant capital allocations, it’s key to build strong relationships and meet in person with representatives from that asset.

• Deals on foreign assets, especially alternative investments like real estate and infrastructure, can translate into tax and compliance pitfalls for pension funds without experience in a certain country.

Familiarity with the politics of a particular country can also give an investor an edge, says Masom. “There are countries — or regions within countries — overseas that are looking at really impactful environmental regulation that could immediately impact returns through a tax. So a simple one could be a carbon tax.

“Let’s say we know about some legislation in a country that’s going to really push all electric vehicle usage in a really quick fashion and they’re going to ease into a graduated tax on all carbon output from vehicles or something like that. So immediately you can imagine the impact that would have on equities you might own — not just on the automobile sector, but all of the sectors that support the automobile sector.”

Returning to equities, in analyzing individual companies a single business could provide a pension plan with exposure to dozens of countries. McDonald’s Corp., for instance, is a U.S.-headquartered company, but its investors gain at least some access to the economies of the 118 countries where it operates. “There’s a lot of good portfolio attributes and colour to that as an investor.”

Read: The changing landscape of public and private equity investing

While investing in a multinational may be one way to achieve diversification, looking to invest in companies that compete on a local level with these global organizations is a way to strengthen that diversification, says Peck.

Whether it’s a South Korean beauty products maker that deeply understands its local consumers or an alcohol company capturing the caché of aspirational branding that attracts China’s growing middle class, highly specific opportunities can be found in each country, he says.

Martha Porado is an associate editor at Benefits Canada.

Editorial: Learning by doing during a once-in-a-century crisis

The best way to learn is by doing. And since March 11, 2020, when a pandemic was declared by the World Health Organization, we’ve all...

With many employees struggling with finances since the coronavirus pandemic started last March, two experts weigh in on the viability of offering a workplace emergency...

For years, digital offerings played second banana to in-person options for many employers aiming to connect with and support employees. Not anymore. As employers and...

Pension plan committees pivoted to virtual meetings in March 2020 and learned many lessons to apply to year two of the pandemic and beyond As...

McDonald’s Corp. is mandating worker training to combat harassment, discrimination and violence in its restaurants worldwide starting next year. The training requirement will impact 2...

The Alberta Investment Management Corp. is appointing the former head of the Canada Mortgage and Housing Corp. as its next chief executive officer. The investment manager said Evan Siddall...

In a bid to ensure individuals from hot-spot communities get access to the coronavirus vaccine, the Ontario government is working with public health units, business...