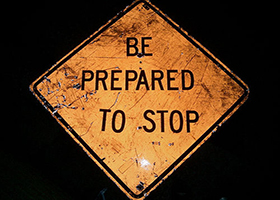 Institutional portfolio management practices have evolved considerably over the last 10 to 20 years but it wasn’t until the last couple of years that they were tested by a severe financial crisis and bear market for equities. After a period like this, it seems constructive to sit back and reflect on what worked well and what didn’t work so well.  This series of blog posts aims to share some ideas and observations on the experience of managing the Workers’ Compensation Board – Alberta’s $6 billion portfolio through this time period.

Over the coming weeks, I will post eight lessons from the crisis. Some are obvious, some confirm long held beliefs, and some are perhaps new observations or conclusions. All eight are related to risk and risk management. Although this was not intended, it was not surprising given the context and the returns experienced over the period being reflected upon.

The negative returns experienced by institutional funds has clearly put a large dent into funded ratios and is causing much angst over contribution rate increases and funding strategies.  There is talk of this being the worst since the great depression, one in one hundred year events, black swans, etc.  The truth is that 2008 really wasn’t that bad and should have been better understood as a real near-term possibility.  The outputs generated by most risk management and asset liability management systems were warning of this possibility all along.

The median return for Canadian defined benefit pension plans was roughly -18% for 2008. The expected return used for funding valuations is roughly 7% and volatility, as measured by standard deviation, is typically about 10%.  With these assumptions, the return of -18% was 2.5 standard deviations below the expected return, which is a 2 to 3% probability. A low probability event, but still one in 40 or 50 years is exactly what the models told us — even historically this seems reasonable.

What is important is that a one in 40 years probability doesn’t mean it won’t happen for 40 years, it could just as easily happen next year.  The actual numbers are slightly different for individual plans and slightly different in surplus risk/volatility terms, but in the same orders of magnitude and roughly the same probabilities apply.  Part of the lesson here is that humans tend to be grounded by recent experience and therefore tend to discount the unpleasant outcomes that the models tell us are going to happen.

The more important issue is that there is a huge disconnect between the risk being assumed by pension plans and the funding arrangements and regulatory requirements in Canada. We should have known this from the models and risk statistics: now it  is certainly obvious in the results from 2008.  The problem is that funding a pension plan at 100% to 110% and assuming the risk that the funded ratio can move up or down by 25% in a really good or bad year just doesn’t make sense.

Example of better funding models can be found in the life insurance industry where regulators require a significant capital cushion above 100% based on the amount of risk being assumed in the investment portfolio and with some workers’ compensation funds where legislation requires 100% funding and there is no upper limit.

At WCB – Alberta, the fund is not subject to the 110% regulatory cap and instead is legislated by the Alberta Workers’ Compensation Act to maintain a funded ratio above 100% at all times. With this requirement, the WCB – Alberta Funding Policy has a target funded ratio of 114% to 128%.  When over the range, surplus is gradually distributed to employers and when below 114%, the required deficiency is amortized and a levy is added to premium rates. With this funding framework, the funded ratio at December 31, 2008 was 112% even after a return of -15.1% for 2008.  This is roughly where it was expected it to be after a 2% or 3% probability negative event. The models predicted that there was a 7.5% probability of going below a 114% funded ratio over any 10 year period.

The lessons learned in 2008 were that the models gave reasonable potential outcomes; plan sponsors shouldn’t be that surprised by the magnitude of negative returns; and the funding arrangements need to be fixed for defined benefit plans to be sustainable.