There has been a lot of talk about variable benefits from defined contribution pension plans recently. Ontario has changes in the works to allow them, while a number of provinces have moved on the issue in recent years. And while it’s not yet common for plan sponsors to offer variable benefits, some organizations have had the option in place for some time.

In the case of the Co-operative Superannuation Society pension plan, it took advantage of federal tax rules permitting the option and began offering variable benefits to its members in 2006.

Have your say: Will plan sponsors embrace variable benefits?

Prior to the change, members of the Saskatoon-based multi-employer plan could choose between buying an annuity from the plan or an insurer or transferring their accounts to a life income or a prescribed registered retirement income fund, says Martin McInnis, the plan’s executive director. “While many of our members wanted to stay in our plan in retirement, an increasing number of them were not interested in an annuity and so were forced to seek options outside the plan. Today, our variable benefits option is the most popular with our retiring members.”

Plan members taking variable benefits choose to set up either a monthly or an annual income stream in retirement, with the option to change the arrangement once per year without paying a fee, according to McInnis. “In addition, if they wish to make a lump-sum withdrawal over and above their monthly or annual income stream, they can do so once per year at no fee,” he says.

Defined contribution plans can pay variable benefits to members at retirement in British Columbia, Alberta, Saskatchewan, Manitoba, Quebec and Nova Scotia. The option is also available from pooled registered pension plans. Federally, the Income Tax Act has permitted the option since 2005, and the government amended the Pension Benefits Standards Act to include variable benefits in 2015. With Ontario working on legislation, New Brunswick and Newfoundland and Labrador are currently the only outliers. While Prince Edward Island doesn’t have pension legislation in place, it permits plans to follow federal regulations.

Despite the legislative hodgepodge, some industry players agree a more harmonized approach to variable benefits would lead to better understanding and increased participation. “Up until now, it’s been too easy for employers to say, ‘Legislation doesn’t require it; I don’t even need to think about it.’ It eliminates one barrier, which I think is a really important one,” says Ofelia Isabel, Canadian defined contribution business leader at Willis Towers Watson.

British Columbia was among the jurisdictions to get ahead of the issue when it introduced variable benefit payments as an option for defined contribution plans in 2004. “It was in response to some initiatives done in other jurisdictions, both domestic and foreign,” says Michael Peters, the province’s acting superintendent of pensions. “It just seemed to us to be a logical extension of the regulatory system . . ..”

With legislation taking effect in January 2018, Quebec is the latest province to permit variable benefits. It’s the only jurisdiction that draws a distinction between whether the plan pays the amounts as life or temporary benefits, allowing employees to structure their retirement income to bridge the gap between an early retirement and age 65, when the public pension kicks in.

“You could use part of your capital to create a higher pension during your early years of retirement and then it would drop at age 65. But since you would get the public pension, overall you wouldn’t get a reduction in pension benefits,” says Julien Ranger, a Montreal-based pension lawyer at Osler Hoskin & Harcourt LLP.

In March 2018, a year after announcing it would permit variable benefits in its 2017 budget, Ontario published a description of its proposed regulations. It summarizes details around notice requirements and statements, as well as the rules around transferring in and out of the plan.

Where the option is available, it’s voluntary and most plans still don’t offer it, says Peters. “To a large degree, I think it’s lack of knowledge and understanding of what this option can do, from the administrator’s side,” he says.

Balancing employee needs with employer risk isn’t a new challenge for the pension industry, but some plan sponsors feel the time for variable benefits has arrived. Farm Credit Canada allows its defined contribution members to stay in the plan after retirement using a locked-in retirement account, but it doesn’t currently offer “a more withdraw-friendly product,” says Adam Kehler, the federal Crown corporation’s manager of pension and benefits. He notes the organization is seriously considering variable benefit payments. “We’re in favour of anything that helps us open up the options on the decumulation side of the DC plan.”

Read: Employers encouraged to focus on the entry, exit points of DC plans

The Co-operative Superannuation Society’s members value the option because of flexibility, control over investment choices and the ability to bequest any remaining funds to beneficiaries or their estate, says McInnis. “They can also continue to participate in the plan’s same investment funds in retirement, as they did in their accumulation phase, and continue to benefit from the plan’s low [fees].”

Indeed, the increased costs of drawing down retirement income in a retail environment is one of the key reasons for the push for variable benefits. “If we look at lower fees, paying group rates, as opposed to retail rates, can stretch out a typical employee’s funds for more than seven years,” says Isabel. “It’s material. It makes a big difference to how long people will have money to actually live on.”

On the other hand, employers may have concerns about retaining retired members’ assets, but that can actually benefit the plan, according to Norma Nielson, director of the financial markets regulation program at the University of Calgary’s school of public policy. “Having more people leave their assets in the plan and subject to professional management is going to reduce the cost per dollar managed. There’s going to be a little more economies of scale there on the admin cost side,” she says.

Another perceived downside for plan sponsors is the associated retention of fiduciary responsibility, says Rosalind Gilbert, an associate partner with Aon Hewitt’s retirement and investment consulting practice in Vancouver. “Most of the communications, contact, information exchange is done through the record keepers, but some plans still do internal administration. So no matter who it is that’s responsible for contacting, it’s just a little more effort to stay in contact with someone who’s not your employee anymore.”

Read: How plan sponsors can set members up for retirement success

The Co-operative Superannuation Society plan doesn’t have the same concerns a single-employer plan may worry about when it comes to maintaining a relationship with retired employees, according to McInnis. “We see the key benefits we provide to members . . . far outweighing the risks associated with delivering a variable benefit product to our members.”

The Canadian Association of Pension Supervisory Authorities is currently revising its guidelines for defined contribution plans in order to assist plan sponsors in communicating with members during the variable benefit phase, according to a spokesperson. “In its revised defined contribution pension plans guideline, CAPSA will be expecting plan administrators who offer variable benefits to provide retirees with information and tools related to longevity risk, investment risk, income projections and sustainable withdrawal rates.”

Prolonged contact and continued communication can increase litigation risk, says Sommers. For example, where an employer is sending out additional statements, there’s a greater risk of facing penalties, such as the new administrative monetary sanctions in Ontario.

There’s also an increased risk around calculating the variable benefit, he adds. At the federal level, the Income Tax Act determines the minimum annual withdrawal amount, with the maximum subject to the Pension Benefits Standards Act, according to the Office of the Superintendent of Financial Institutions. While a retiree taking variable benefit payments from the plan chooses how much to withdraw each year, it’s down to the plan administrator to calculate the applicable minimum and maximum amounts.

“And, of course, that increases the risks as well, because if you do the calculation wrong and you let someone take out too much or they take out too little, as the administrator, you could be looking at liability for making a mistake for doing a calculation you don’t have to do today that’s created strictly by the fact that you’re now allowing variable benefits,” says Sommers. 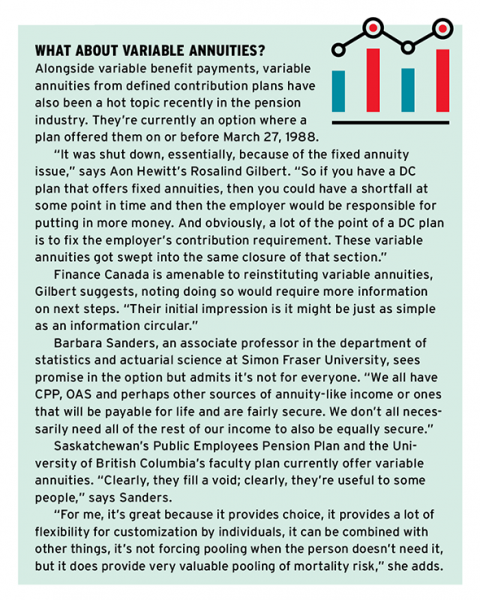 “And, of course, it increases the risk. If someone can challenge me [on the basis that] the default fund you picked wasn’t appropriate for retirees, then there’s a possible risk there,” he adds.

One way to address the issue, according to Sommers, is to build safe-harbour rules into legislation. “If they were going to go down this road and try to make it as attractive as possible to employers, I think including in the legislation some sort of safe-harbour provision dealing with investments, that would be a helpful thing to do to encourage employers.”

There are three options for an organization to offer variable benefits. A large plan with pension expertise would typically manage the benefits itself, as is the case with the Co-operative Superannuation Society, which is the administrator and the record keeper. “We modified our in-house system to provide variable account functionality when we began offering variable benefit accounts,” says McInnis.

The third option fits between the retail and group environments: collector plans offered by record keepers from which members can draw down their retirement income. The benefits include lower fees, pooled assets and a more robust investment platform. “It’s a partial solution and it’s better than retail, but it’s still not quite as good as internal,” says Gilbert.

Sanderson disagrees. “An insurer or other service provider can basically design this one collector plan and all of their DC products will feed into the same arrangement, so you may get better economies of scale through the collector plan than you would if you kept it in the source plan.”

Moving employees into a collector plan is the prevailing approach, adds Sanderson. “While my frontline experience in this area is from many years ago, I’ve never seen an employer wanting to retain management of pension-like benefits for former employees if they could offload that responsibility.”

Overall, Sanderson doesn’t see a lot of upsides for employers or employees when it comes to variable benefits. “I think it’s an attempt to reinvent a wheel that either existed at the time but wasn’t recognized or has evolved since the time,” he says.

At least on the legislative front, Isabel believes the environment is changing. “Employers, because they’re going to start to worry about people staying in their organizations longer than they should, will get more educated around this. And once they do, they’ll see it actually doesn’t increase their risk and the benefit that they’re providing far outweighs any risk. And employees, as more of us start to retire from DC plans, I think they’ll also start to ask for more and start to pay more attention to how they’re being impacted.”

Jennifer Paterson is the managing editor of Benefits Canada.