Changes to Quebec’s pension legislation, including a move away from solvency funding requirements and the introduction of a cost-sharing model, against the backdrop of a low interest rate environment has had a major influence on the City of Montreal’s pension investment strategy.

While each plan is responsible for its own investment policy, they’ve been essentially the same since inception. In 2019, all of the plans adopted updated policies that target a two per cent allocation to cash, 29 per cent to bonds, 10 per cent to Canadian equity, 34 per cent to foreign equity and 25 per cent to alternatives.

Read: A primer on reviewing statements of investment policies and procedures

“We are not there at this moment,” says Jacques Marleau, director and deputy treasurer of the City’s finance department and president of La Commission de la Caisse Commune. “We have lower exposure to alternatives and higher exposure to Canadian equity, but we are working to go down that route to achieve this new asset mix that was adopted during 2019.”

Getting to know
Jacques Marleau

Job title: Director and deputy treasurer of the City of Montreal’s finance department

Joined the city of Montreal:
In 1987, but started working with the pension fund assets in 1995 and took
on his current role in 2001

Previous roles: Economic analyst at the Bank of Canada

Outside of the office he can be found: Exploring nature by backcountry hiking

The latest change is part of a broader, gradual increase in alternatives — in 2000, the portfolio’s allocation to the asset class stood at three per cent, then grew to eight per cent in 2001 and 16 per cent in 2008.

Over the years, the plans’ investments have been influenced by changes to the legislative landscape and the current investment context. In 2006, Quebec’s municipal sector retirement plans became exempt from solvency obligations. In 2014, legislative changes forced the plans to move to a cost-sharing model, requiring a 50-50 sharing of current service costs and future deficit costs. However, the model had to be negotiated with various unions and it took a few years to reach an agreement. When the agreement was finalized, the City started the process of reviewing its investment policy.

As a result of the solvency changes, the plans are focused more on portfolio optimization than the mark-to-market position of their liabilities, says Marleau. That said, the cost-sharing model raised concerns about risk and a desire to lower the portfolio’s volatility.

The City was also sensitive about moving too fast to lower risk assets because it would require reducing the expected rate of return for the plans’ actuarial valuations, he notes. In addition, lower expected rates of return on the valuations would lead to higher current service costs in order to meet benefits payment obligations. 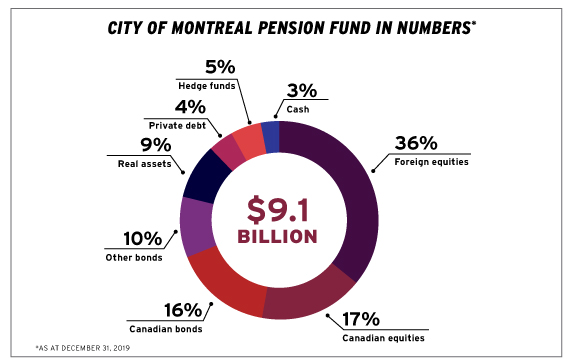 In the context of a low interest rate environment, the plan moved to alternatives because they complement a traditional fixed income portfolio, achieve good cash flow and earn a better expected rate of return, says Marleau. “If you make a big allocation to the bond sector, you will end up with a lower expected rate of return for sure, and then it will [result in an increase of current service] costs and there’s a lot of sensitivity on that side.”

Read: How is fixed income faring amid renewed market volatility?

He notes the City’s plans are looking specifically for alternatives that offer a stable cash flow. And the plans are moving to their new alternative allocation target through a phased approach, says Marleau. “There’s not that much product in the market that meets our objectives.”

If interest rates stay low, when the plans reach their target, they may try to achieve an even higher level over time, he adds.

Telus Communications Inc. is training its people leaders to recognize when employees are experiencing mental-health struggles. The organization provides leaders with scripts to refer to when they...

Financial education and well-being initiatives are in the spotlight as employees face the stress of multiple financial headwinds — from inflation reaching a 40-year high...

Half of Canadian employers increasing salary budget for 2023: survey

Half (48 per cent) of Canadian employers say they’re increasing their salary budget for 2023, according to a new survey by Normandin Beaudry. The survey,...