Any job applicant knows that in an interview, it’s important to sit up straight, lean in and make eye contact. But body language isn’t crucial only for potential employees — it also counts for current staff members.

Body language is very important in the workplace, according to Kristin Coulombe, director of human resources at Jones DesLauriers Insurance Management Inc. in Mississauga, Ont. “You work with your peers eight hours a day, so be positive, be attentive and use your body language to show that,” says Coulombe. “If a colleague is talking to you and you’ve got your back turned, turn around, lean in, express interest, make eye contact.”

Read: How to confront incivility in the workplace

The link to performance

Ernest Paskey, a partner and assessment leader at Aon Hewitt, agrees, adding that a person’s body language is meaningful because of the link between behaviour and performance.

“All the non-verbal behaviours an individual is engaged in are related to some kind of performance dimension,” he says. “Performance can tailor a person to the right kind of job.” Gregariousness and emotional expression, for example, could signal someone who’s a good fit for a sales role or building teams, he says.

The opposite also applies. “Somebody who doesn’t have good posture, doesn’t make eye contact [and] is very reserved may not be good for sales; however, they may be good for other jobs that require focus, attention to detail and the ability to work by themselves,” says Paskey.

In its case, Jones DesLauriers incorporates elements of body language into its management and sales training courses. “Think about managers having performance or compensation discussions with their staff, giving feedback, positive or negative, and the impact body language can have on those discussions,” says Coulombe.

For sales roles, body language can be very important, particularly when it comes to too much movement. “[Employees] fidget when they’re nervous, when they’re pitching or closing a deal or when they’re talking and they’re flailing their arms because they’re trying to get their point across. They don’t realize how distracting it could be to the client,” says Coulombe.

And while Coulombe has never had a discussion with an employee about the person’s body language, the issue has arisen in performance or disciplinary conversations as part of bigger issues. “It would be a conversation like, ‘Over the last few months, we’ve noticed you’ve been a little bit more secluded at your desk. Your head is down. When we’re talking, you’re not coming across as engaged as you once were. Your hands are crossed.’”

Coulombe also notices people’s pace in the workplace. “I personally find that’s very telling because they don’t have all the time in the world,” she says of those who walk with purpose. “They’re effective, they’re efficient. Whether that’s body language or not, that’s something that sticks out in my mind.” 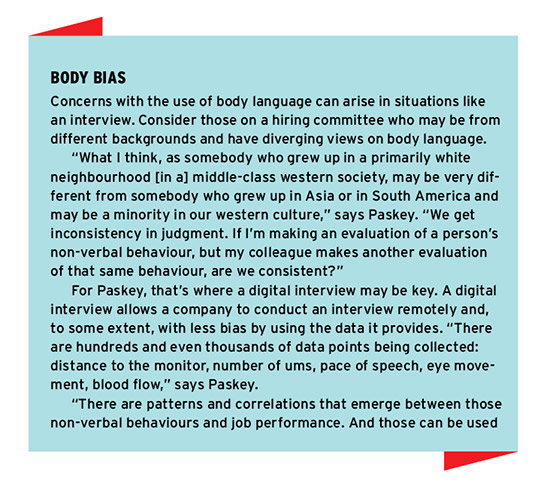 Brooke Smith is a Toronto-based freelance writer and editor.

Expert panel: How to get, keep top talent amid labour crunch

A story looking at dynamic pension pools as a decumulation option took the top spot over the past week on BenefitsCanada.com. Here are the five most popular...

How employers can use benefits offerings to support Indigenous employees

Real progress means walking the walk, not just talking the talk. In recent months, many employers have shown support for the Indigenous community by lowering...

The federal Liberal Party is following through on an election campaign promise by introducing legislation that would provide 10 paid sick days per year to...

In the early days of 2020, no one could have foreseen the social and economic havoc the coronavirus pandemic would wreak on the world. Nearly...

Manulife Financial Corp. is once again giving $50 to each of its 37,000 global employees in their local currencies to “pay it forward” this holiday season. The...

Expert panel: How to get, keep top talent amid labour crunch

For months, Canadian employers have been creaking under the strain of a labour crunch. Finding top talent has always been one of leaders’ most pressing...