Jesus had a fractious relationship with the financial sector of his day.

For those who work at the intersection of religion and finance, the reverberations of his courtyard scuffle with a group of moneylenders remain the source of controversy. Fortunately for Derek Hurst, manager of the Pension Plan of the United Church of Canada, he has no shortage of guidance.

“Our governance structure is quite robust. I report to an 11-person investment committee which reports to a 11-person pension board,” says Hurst, who’s been overseeing the decisions of the $1.6 billion defined benefit plan since 2015. “Additionally, there’s an advisory committee with eight volunteers. The calibre of these volunteers is very high — it’s incredible to me that we get people so interested in helping the plan.”

While Hurst reports directly to the investment committee, there’s considerable leeway in investment decision-making. “It is a pension plan for the [UCC], but it has delegated responsibility to the pension board, so the larger organization doesn’t dictate investment policy. But the pension board does incorporate the [UCC]’s values and important issues.”

On some issues, the UCC’s rules for the management of its own assets differ from its pension’s rules. While the UCC doesn’t invest in petroleum sector businesses, the plan does, though a proscription list prevents investments in certain sectors, including tobacco. This free hand has allowed the plan to meet its significant financial obligations. 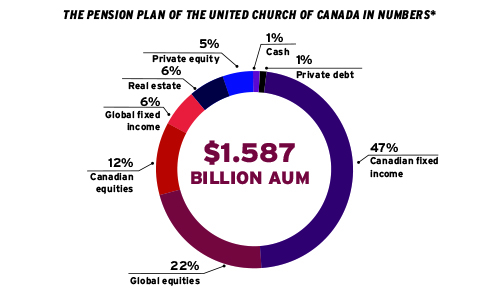 With more than 5,000 retirees and about 3,200 contributing members, the PPUCC is exceptionally mature. “The PPUCC is for the benefit of ministers and other employees, who typically come into ministry as their second or third career. At the end of the day, I’m always impressed that the [UCC] views the pension plan as an attractive feature worth maintaining.”

Part of the reason for the UCC’s willingness to stick to the DB model may be that the plan is in good financial shape. It’s fully funded on both a solvency and growing-concern basis.

Getting to know
Derek Hurst

What keeps him up at night:
“Lots — the pandemic, war, inflation and the climate emergency come to mind.”

Outside the office he can be found:
Doing something involving music in some way and, lately, torturing his family with his guitar playing.

Since 2010, the PPUCC has established a responsible investment strategy that reflects UCC’s interest in Indigenous rights and climate change. “We integrate [environmental, social and governance] issues into our investment decision-making process. The expectation is that all our managers reflect on those issues in their investment decision-making. I think that should be a built-in . . . , not a purely ethical stance.”

As part of its stewardship strategy, the PPUCC collaborates with the Shareholder Association for Research Education to vote the plan’s shares alongside a wide range of like-minded pension plans, Indigenous trusts, universities and religious institutions. The collaboration has also allowed it to take a firmer stance with the companies in which it invests.

“[Shareholder motions] are usually the result of conversations with companies we invest in,” says Hurst. “We only file shareholder resolutions when management isn’t responding. We want to focus on issues that are important to us — like climate change and Indigenous rights.”

In 2020, the plan filed a resolution with Ovintiv Inc. calling for the petroleum exploration firm to set climate targets. Despite opposition from management, the resolution secured 56 per cent of the vote. But the plan is prepared to file motions, even when success is unlikely.

“With [TransCanada PipeLines Ltd.], we filed a resolution on Indigenous rights. It wasn’t successful, only getting 10 per cent of the votes, but it drew attention to the issues on the [United Nations’] Declaration on the Rights of Indigenous Peoples and securing free, prior and informed consent.”

Since signing the UN-backed principles of responsible investing in 2016, the PPUCC has also focused on working with like-minded investment managers. To ensure the plan’s will is being done effectively, Hurst regularly meets with these managers, all but one of whom are UN PRI signatories.

“I’m always looking for our investment managers to ask tough questions of management. Generally, I’m pleased with what they tell me about what they are doing. . . . When I’m not pleased, I express it — though I try not to be confrontational in trying to push them forward in their ESG journey to better align with the plan’s.”

The Caisse de dépôt et placement du Québec is partnering with an asset manager to provide a credit facility to an electric vehicle subscription service....

Vancouver City Savings Credit Union is supporting employee well-being by increasing its coverage for mental-health benefits from $1,500 to $10,000, per employee and per dependant....

As the coronavirus pandemic prompted a meaningful change in how employers communicate with their workforces, Telus Communications Inc. reviewed job types and created personas around...

Nearly two-thirds of institutional investors say they’re planning to increase their allocations to real assets over the next two years, amid a backdrop of inflation...