The Adirondack 46ers isn’t for the faint of heart — joining the club requires hiking 250 kilometres to reach the top of the 46 highest peaks in New York state.

“What did it take? Perseverance, training and an ability to remain focused on an objective that is far away,” says François Quinty, director of investment management at Via Rail Canada Inc., who joined the exclusive club as a young man. “I wouldn’t try it now — I’ve become too lazy.”

While Quinty’s hikes may be less ambitious these days, he’s still reliant on training, perseverance and focusing on distant goals in his professional life. After all, he’s responsible for managing Via Rail’s pension plans, including one closed defined benefit plan, one open DB plan, two defined contribution pensions and a hybrid plan. Across these five plans, about two-thirds of the 9,000 members have already retired.

“Unlike many going-concern plans, we tend to focus on minimizing risk rather than maximizing returns due to our maturity profile.”

Dealing with the DB plans’ maturity — and the risk it poses to the company — has occupied much of Quinty’s 19 years with the rail transport giant, which — like Benefits Canada — is celebrating its 45th anniversary this year. “If you look at the size of the plan relative to the operating business, we’re one of the most exposed plans in Canada, with the DB plans representing 10-times our annual employee compensation.”

Getting to know
François Quinty


Job title:
Director of investment management at Via Rail Canada

What keeps him up at night:
How high long bond rates go can go

Outside the office he can be found:
Hiking, spending time with family and keeping up with the news

In 2008, Quinty made his first big move, raising the DB plans’ fixed income allocation from 35 per cent to 40 per cent, replacing half of the nominal bonds with long duration bonds and eliminating global bonds entirely. “From 2012 to 2017, we progressively increased our fixed income allocation, completed the transfer from universe to long bonds and introduced a bond overlay, based on a number of milestones.”

Quinty credits the strategy with making a meaningful difference, allowing the plans to boast a solvency ratio above 100 per cent for the past five years. “Half of our assets are now in fixed income — investment grade and Canadian only. We make use of duration extensions with repurchase agreements and have a small allocation to commercial mortgages. We have a bond overlay in place with a target of 18 per cent synthetic exposure and we have a sizeable allocation to commercial mortgages.”

In 2020, as a response to the chaos caused by the coronavirus pandemic, Quinty and his team once again reduced the portfolio’s fixed income allocation, lowering the duration of real return bonds and eliminating long bonds. In 2022, in response to very different markets, they placed commercial mortgages and real return bonds back in.

“This year’s correction, in terms of long duration fixed income, was pretty brutal, so we’re reducing our equity exposure to the minimum we can have and remain in compliance. Despite this, our funding position has continued to grow.”

One of the challenges of the job, says Quinty, is holding asset managers to account. Indeed, when a firm’s service is truly wanting, he has to force himself to take a direct approach. “At times, I’ve had to call more senior individuals to shake the organization. It isn’t something I enjoy.” 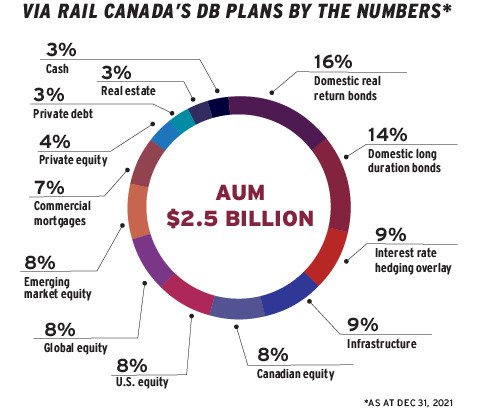 He much prefers working with his team, though it also has its challenges. “Keeping people motivated at a plan that’s closed and shrinking is a challenge, especially when there are limited opportunities to move forward within the organization.”

To engage his three-person team, Quinty allows them to directly manage the real return bonds allocation, valued at about $360 million. “I know they’re likely to eventually move on to achieve their career goals, so it’s important to give them the chance to hone their skills.”

Read: A look at the pandemic’s impact on pension plans in Canada’s travel, transportation sectors

Another way he keeps the team engaged is by providing them with limited autonomy in investment decisions, as well as free rein to voice their opinions during regular meetings about the plans’ overall strategy. “We’re now reflecting on how to restructure our fixed income allocation. We plan to de-risk further given our strong solvency.”

Quinty credits some of his success in managing a small team of ambitious investors to Chris Caswell, Via Rail’s former director of investment management who, 19 years ago, hired him as an investment analyst. “The No. 1 reason why people move on from a job is because of a bad boss — I was lucky to have such a good one.”