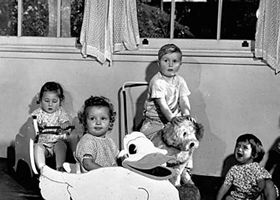 Baby Boomers were born to parents who grew up during the turbulent years of world history. Those parents had to sacrifice and deprive themselves from the basics, be it good education, cheap or free health care or a healthy work environment and living. As such, they wanted their children (the Boomers) to have it all – all that they themselves missed or gave up. And baby boomers took advantage of everything they could.

They were lucky in another way, too. The western world was stable (the European Union just won the Noble prize because of this) and these countries did not experience any catastrophic war as the 1st or 2nd World Wars. Most of them did not have to serve in the army and they did not learn the discipline this entails. There were plenty of jobs to go around. There was easy credit and the proliferation of banks competing for their attention and business helped them buy large houses, big cars and have a comfortable living. The sharp rise in house prices and the stock and bond markets benefited them, too. They had it all.

But they became very complacent. They felt they were “entitled to their entitlements.” They wanted less work, longer vacations and a good life. And they wanted it all now. Boomers did not want to wait for future consumption. Instead, they loaded up on debt. Debt per capita in the western world skyrocketed over the last 10 years alone, up 142% in Portugal, 94% in Spain, 63% in Germany, 223% in UK, 90% in France 105% in Greece, 33% in Italy, 47% in Canada, 37% in Japan, 269% in Ireland and 151% in the US according to Bloomberg BusinessWeek.

But now, Boomers’ luck may be running out and a reckoning may be nigh. It will not be in the form a military confrontation as it was with past generations. Rather, it will be an economic and political confrontation which may require similar sacrifices to those made by their parents and grandparents.

First, indirectly. Baby Boomers have stolen the future of their own kids who cannot get the good jobs, the cheap education, the large inexpensive house, the perks that their parents have enjoyed. The children of the Baby Boomers will have to pay the price for their parents’ luck. They will have to live with less. They will have to pay higher taxes and enjoy much less government spending, benefits and services. And they will not accept this easily, as the “Occupy Wall Street” movements around the world last year showed.

Second, directly. Given current the state of monetary and political leadership, it has become inevitable that the only way to get the economy started will involve further government spending and massive amounts of debt and/or printing huge amounts of money (mostly the latter). Hard work, perseverance, risk-taking and sacrifice may not be part of the equation. Baby Boomers will not go for it.

When Boomers get anxious, uncomfortable and unhappy, monetary authorities around the world bend over backwards to accommodate them. Moreover, politicians cannot antagonize them or deprive them of their entitlements because those Boomers represent a big voting bloc.

Last month, the Fed threw just about everything at the faltering economy with the hope that it will appease the markets, which are controlled by Boomers. It launched QE3 (after QE1 and QE2) which involved buying $40 billion a month of bonds for as long as it takes in order to “improve substantially” the economy.  And there is “much more (quantitative) easing to come” according to Michael Gregory, senior economist at BMO Capital Markets.

I don’t expect this to end well. Had monetary and fiscal leaders accepted higher interest rates and a recession in previous years, and allowed the economy to reset, we may have been in better shape now. And the longer the pain and sacrifice are delayed, the sharper the economic and financial fallout. Perhaps the high and rising again gold prices are a reflection of this fear.

The end of Canada’s quantitative easing strategy and higher than expected interest rates will be beneficial to Canadian defined benefit pension plans, according to Sebastien Betermier,...

Risk managers consider cyber attacks and data breaches as the biggest threats to businesses, including those in the financial sector, according to a new survey...

The Ontario Teachers’ Pension Plan is putting its investment dollars and its Teachers’ Innovation Platform to use for a cryptocurrency exchange. During a funding round...

The Canada Pension Plan Investment Board is appointing Deborah Orida as its first chief sustainability officer. In the role, Orida will lead the CPPIB’s efforts...

Refreshing and re-communicating its mental-health program during the coronavirus pandemic led to 3M Canada’s win at the 2021 Workplace Benefits Awards on Oct. 14. Back...

Roughly two-fifths (41 per cent) of plan sponsors reported offering virtual health-care services through their benefits plan, according to the 2021 Benefits Canada Healthcare Survey. Among...