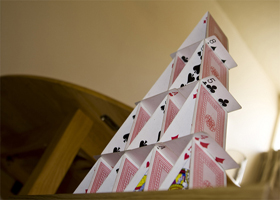 A ratio that nowadays puts fear back into bull market proponents is the so-called Shiller P/E or CAPE (cyclically adjusted price to earnings), which is calculated by dividing the market’s price by its inflation-adjusted average annual earnings over the past 10 years. The ratio is named after Robert Shiller, professor of finance at Yale University, who foresaw the market crash of the early 2000s.  According to this ratio, markets have been overvalued for the last two years. This approach is quite different from the standard P/E ratio, which divides share price by earnings over the past 12 months. The Shiller P/E takes a long-term perspective that smoothes out the effects of the business cycle. By doing so, it hopes to ascertain whether the market is trading at a reasonable price in comparison to its sustainable earnings.

Since 1881, the Shiller P/E for the S&P 500 (and its predecessor stock averages) has averaged about 16. Its current value? It is about 25, implying that stock prices may decline in value by over 30 per cent – a number that is sure to scare investors who are still licking their wounds from the last market sell-off. Not everyone, though, agrees about the usefulness of Shiller’s P/E. The bulls find flaws; the bears swear by its accuracy. The latter argue that CAPE has no short run predictive power but has proven to be a pretty good predictor in the long run – periods longer than five years.

I have discussed Shiller’s P/E ratio in the past and have taken issue with the conclusions drawn about the direction of the markets by a number of commentators, as they ignore factors driving the theoretical value of the P/E ratio. The theoretical value of the P/E ratio can be derived from the equity cash flow valuation model under the assumption of constant growth to infinity. It is given by the following formula.

where the components are supposed to be long-term averages. As can be seen from the formula, the theoretical value of P/E is primarily a function of the discount factor – the expected return on equity (Ks) and the long-run earnings growth rate (g). The expected return on equity can be normalized to about 10 percent – namely, risk free rate of four percent, market risk premium of six percent and a market beta of one, as derived from the popular capital asset pricing model. The long term, or sustained, earnings growth rate can be determined, based on a popular textbook formula, as the product of return on equity (ROE) times the company’s retention ratio (b) – the percent of earnings retained for investment purposes. According to the November 2013 Quarterly Letter of GMO (Grantham Mayo Van Otterloo), the long term (1970-2012) average ROE for U.S. companies is 13 percent, while b (over the same period) is 0.57 based on Wikipedia (http://en.wikipedia.org/wiki/dividend_payout_ratio). This leads to an implied sustained earnings growth rate of 7.41 percent in the long run, assuming the future will unfold, on average, in similar fashion to the past. If we insert all the above values into the theoretical formula for P/E, we obtain a long term normalized average P/E of 17.9, which is 28% lower than the current CAPE of about 25.

Sensitivity analysis can help determine the key drivers of this ratio. For example, the long term growth rate could be overstated in a low inflation environment, and a number closer to 6.5 percent may be more realistic. If we keep b at .57, then a 6.5 percent growth rate implies an ROE of 11.4 percent – low by historical standards, but not unreasonable for a low inflation, low government spending and high tax environment. In this case, CAPE’s theoretical value is 13.1 – wow! If we keep growth at 7.41 percent and raise the expected return on equity to 11%, then CAPE becomes 12.9. An expected return on equity of nine percent, closer to what it is currently, and a growth rate of either 7.41 percent or 6.5 percent imply a CAPE theoretical value of 29 or 18.3, respectively.

We see that CAPE is sensitive to the difference between the expected return on equity and the growth rate. The current CAPE value of 25 implies a spread between the two of about 0.018. Assuming an expected return on equity close to the all-time low of nine percent, the above-mentioned spread implies a growth rate of 7.2 percent at today’s CAPE ratio.

The trouble with CAPE

Here are my thoughts on this. The current CAPE of 25 is not terribly high in today’s economic environment, and hence is not pointing to overvaluation, assuming the earnings growth rate going forward is 7.2 percent, i.e., comparable to its long-term historical average of 7.41 percent, and the expected return on equity remains at the current all-time low level of nine percent.  However, if an investor believes that we are heading into a future of higher interest rates and/or lower growth, then the current CAPE is indeed signaling overvaluation.

I am not going to say which scenario is more realistic – a future similar to the past or a future different from the past?  I leave this to the reader to decide, with two facts to consider. First, corporate profits are booming because of declining commodity prices and a weak jobs market that has driven down the cost of labour (the share of U.S. GDP going to labour income is at its lowest level in 50 years) – so one has to wonder where the growth in profits will come from, especially as going forward it is fair to assume that we will be in an environment of lower government spending, higher taxes and lower productivity. And second, the current environment of rock bottom interest rates (and expected return on equity) leads to the conclusion that there is an increased chance of higher interest rates and expected return on equity in the future!

Is value investing dead? And what does this have to do with low or negative interest rates?

The end of Canada’s quantitative easing strategy and higher than expected interest rates will be beneficial to Canadian defined benefit pension plans, according to Sebastien Betermier,...

Risk managers consider cyber attacks and data breaches as the biggest threats to businesses, including those in the financial sector, according to a new survey...

The Ontario Teachers’ Pension Plan is putting its investment dollars and its Teachers’ Innovation Platform to use for a cryptocurrency exchange. During a funding round...

The Canada Pension Plan Investment Board is appointing Deborah Orida as its first chief sustainability officer. In the role, Orida will lead the CPPIB’s efforts...

Refreshing and re-communicating its mental-health program during the coronavirus pandemic led to 3M Canada’s win at the 2021 Workplace Benefits Awards on Oct. 14. Back...

Roughly two-fifths (41 per cent) of plan sponsors reported offering virtual health-care services through their benefits plan, according to the 2021 Benefits Canada Healthcare Survey. Among...