Home Archives May 2018 Do employers have a legal duty to address the health effects of sitting at work?
Helen Burnett-Nichols

That counts as risky behaviour given studies that have linked sitting more than four hours a day to a number of long-term health risks, such as heart disease, diabetes and back pain.

But when that inactivity is largely the result of months and eventually years spent at a desk job or in meetings, could an employer face liability for any serious medical issues that ensue?

A recent study from Philadelphia’s Drexel University concluded that — at least for U.S. workplaces — the answer might be yes.

Researchers examined the structure of liability in the United States for workplace injuries and specifically focused on the issues of sitting in the workplace and the accompanying medical problems. Their conclusion was employers should be accountable for the issue because it would give them an incentive to reduce such harms and change workplace design in order to avoid liability.

Although the paper did note that establishing the workplace as a cause of the harm could be a minefield, it suggested there have been cases that show the “courts may be willing to find that claimants have satisfied the requirements.” 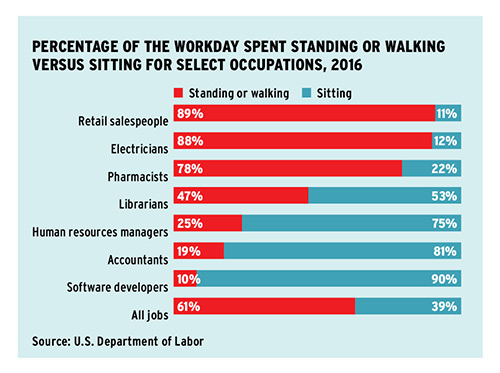 Is the same true of Canadian workplaces? Are employers that fail to encourage employees to stand and move during the workday potentially liable for injuries claimed by workers as being the result of years of sitting behind a desk?

According to Ellen Low, a partner at Toronto’s Whitten & Lublin law firm, there are currently no cases in Ontario that come to mind that relate to the issue of excessive workplace sitting. As with the U.S. study, causation — establishing that the workplace was the cause of the injury or illness — is always going to be the main problem in such cases, she notes.

At the same time, Low says existing or potential liability for employers in such situations could sit under the umbrella of provincial occupational health and safety rules — although nothing in the existing laws speak to excessive sitting — or human rights legislation.

Read: Employer encourages workplace walking with Fitbits for all staff

The definition of disability under Ontario’s Human Rights Code is broad, according to Low. If, for example, a doctor recommends that an employee with a heart condition should move around more at work, an employer would likely have an obligation to consider whether or not that constitutes a request for accommodation. An employer’s refusal to accommodate could be a breach of human rights provisions, says Low.

The employer, she says, “has an obligation to evaluate whether or not that request can be accommodated up to the point of undue hardship, by taking into consideration things like cost, funding, health and safety requirements, morale of other employees.”

Unlike other jurisdictions that have taken legislative action on the issue — for the last four years, employers in Denmark have faced a legal requirement to offer employees the option of a height-adjustable workstation, for example — there’s currently no legal duty on Canadian employers to allow people to get up and move around, says Low.

But with workplace laws continuously shifting, change is always possible, says Jennifer Kwok, a lawyer with Overholt Law in Vancouver.

“I think it might be one of those things that, as more studies are done and maybe the health repercussions of sitting for lengthy periods of time become actually a well-known problem in the workplace, then maybe there would be some impetus on the part of the government or other organizations to change legislation to say employers must give employees the opportunity to take X amount of breaks or walk,” she says.

In the meantime, Low notes that on the occupational health and safety side, a lot of discussion is happening around the promotion of healthy, physically active workplaces. Over the last few years, both the government and private sector employers have taken steps to address the issue voluntarily through workplace design and culture shifts.

According to The Canadian Press, a 2015 pilot project to install sit-stand desks for staff at Employment and Social Development Canada saw positive results seen in terms of increased energy and productivity. In the private sector, companies such as Manulife Financial Corp. have implemented flexible workplace designs that incorporate sit-stand desks.

More broadly, the government launched an effort in 2017 called Sit Kicker that focused on encouraging people in up to 1,500 workplaces to reduce sedentary behaviour and shifting workplace culture towards environments that are more amenable to standing.

“That’s the nature of employment these days, I think. It is sedentary, and I think a lot of employers are doing a good job of trying to encourage their employees to take walking breaks or join a gym or have wellness programs,” says Kwok.

“But in terms of actual legal liability, I don’t think that we’ve gotten to that point yet,” she adds.

Ultimately, Low says it’s a “serious possibility” that employers will receive more requests for dynamic workplaces, similar to the demand for ergonomic workstations seen a few years ago. “If someone asks, for example, for a standing desk, is that a totally unreasonable thing to provide? And if it’s not and it fits within the company’s structures, organization and policies, then do it or make that part of an ongoing policy, which is that you’re promoting physical fitness and physical wellness,” she says.

“Now, is it a legal requirement to provide that desk? Probably not, but from a policy and workplace philosophy standpoint, it makes a lot of sense,” she adds.

Helen Burnett-Nichols is a freelance writer based in Hamilton, Ont.

Business leaders ‘out of gas’ as pandemic drags on

58% of frontline workers expect work stress will stay the same or worsen in 2022: survey

The vast majority (88 per cent) of institutional investors have reduced their allocations to fixed income over the past 18 months, according to a survey...

Financial sector workers with a keen understanding of sustainable finance issues are in high demand in Canada, according to a United Nations-backed report. The report, commissioned...

Consensus is building among Canadian business leaders that inflation will average above three per cent over the next two years, according to a new survey...

PIAC to focus on growing membership in 2022, says new board member

The Pension Investment Association of Canada board is prioritizing a return to business as usual and the expansion of the association’s membership in 2022. The...

Head to head: Should employers worry about time theft with remote workers?

With the shift to working from home during the coronavirus pandemic, some leaders are concerned about what employees are actually doing, or not doing, during...

78% of U.S. employers focusing on quality of health benefits over cost: survey

About three-quarters (78 per cent) of U.S. employers said they’re more focused on the quality of health care over cost management when making decisions about...

The Responsible Investment Association is appointing Patricia Fletcher as its incoming chief executive officer, effective Feb. 7, 2022. Prior to the new role, Fletcher was...