The hepatitis C hump is over. Since 2014, Health Canada has approved several promising medications for the disease. While the direct-acting antivirals offer cure rates of more than 90 per cent, they cost tens of thousands of dollars, and benefits plans felt the pinch.

But now, “after an initial spike in treatment requests, claims have levelled off dramatically in the last year,” says Yatin Patel, a pharmacist at the Alberta School Employee Benefit Plan in Edmonton.

Medavie Blue Cross has also seen a significant decline in new patient starts for hepatitis C medications, says Chris Goguen, the insurer’s strategic pharmaceutical partnerships lead in Moncton, N.B. Demand is now one-fifth of the volume it was a year-and-a-half ago, although there may be a slight bump if and when the medications are approved for more indications, says Christine Than, a pharmacist and drug solutions specialist at Aon Hewitt in Montreal.

For example, in September 2017, Health Canada expanded the indication of Epclusa to include patients also infected with HIV. Similarly, in April 2017, the U.S. Food and Drug Administration approved Harvoni and Sovaldi to treat adolescents. But with relatively few teenagers diagnosed with the disease, Than predicts that, even if Health Canada follows suit, the budget impact will be minor. 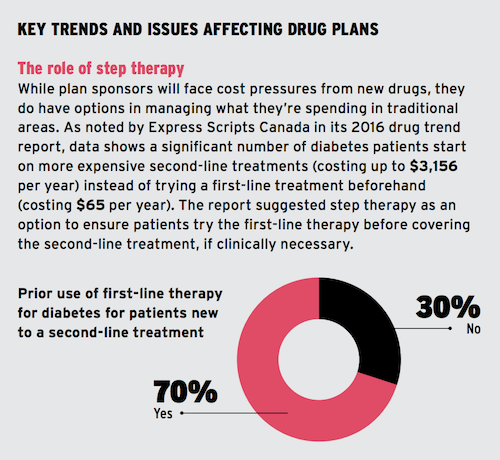 In recent years, there was also a concern that PCSK9 inhibitors, which treat high cholesterol, would put a pressure on benefits plans. But the financial impact has been modest. According to data from IQVIA, those drugs make up just 1.3 per cent of private payers’ total cholesterol claims costs. For one, PCSK9 inhibitors are only recommended for patients with familial hypercholesterolemia or those with atherosclerotic cardiovascular disease who aren’t improving despite being on the maximum dose of statins.

Medavie Blue Cross ended up paying just 10 per cent of anticipated costs for PCSK9 inhibitors, which Goguen attributes to the company’s statin adherence model. “Our prior authorizations nurses were able to look, in real time, at members’ historical use of statins, which is the low-cost traditional drug used, to determine whether members had actually been adherent to [them] first,” he says. If they hadn’t been adherent, the insurer wouldn’t reimburse them for a PCSK9 prescription.

Looking ahead, plan sponsors should prepare for new biologic drugs for conditions that currently don’t have pharmaceutical treatments or may replace existing medications, according to Goguen. When it comes to biologic drugs, new treatments for migraines are in the works for which manufacturers are expected to apply for regulatory approval in the United States by the end of the year, according to Telus Health’s spring 2017 report on drugs in the pipeline.

“Migraine is a silent disease,” says Than, noting that in North America, 20 per cent of women suffer from some sort of migraine issue, as do six per cent of men. While the new drugs target a subset of that patient population — those suffering from frequent, debilitating migraines — they can still put pressure on benefits plans. For one, they’re expensive, at an estimated cost of about $10,000 per year, according to Than. Furthermore, migraines are often underdiagnosed.

“A lot of people just don’t think of consulting,” she says, noting that may change as soon as the drugs are on the market. “Same as hepatitis C. Once there’s an effective medication that’s out on the market, there’s press for it, people know about it, there’s word of mouth, then more people are going to consult.” 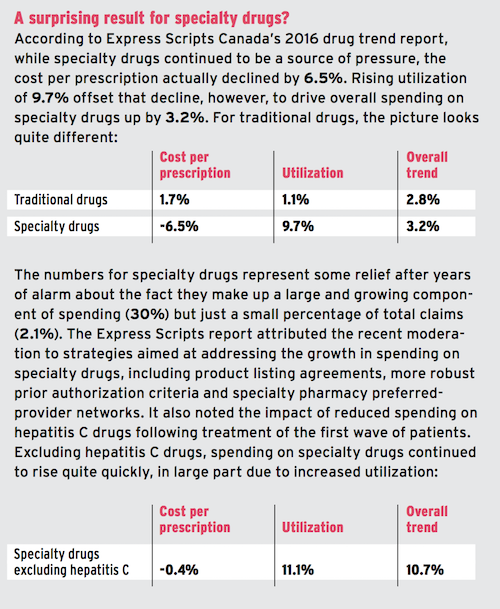 The biologic drugs in the works for migraines are, however, quite promising, says Dr. Christine Lay, a neurologist at the Centre for Headache at Women’s College Hospital in Toronto. “The drugs work to reduce the frequency of the migraine and also the severity of the individual migraine attack,” she says.

While a number of drugs to address migraines exist already, they sometimes come with side-effects and can take time to be effective, according to Lay. “These drugs seem to have what I call a very early onset of action,” she says of some of the new medications in the pipeline.

Further, she adds, a small percentage of patients in trials have shown themselves to be “super responders,” who no longer get migraines after starting monthly injections. And as to concerns about costs, Lay says clinicians would likely focus on high-frequency migraine sufferers, rather than prescribing the drugs to people who experience them periodically. “People are very excited, as are we,” she says.

Another drug on the horizon in Canada is Eucrisa, which treats eczema by inhibiting the enzyme linked to inflammation. While topical corticosteroids, the go-to therapy for mild to moderate eczema, cost about 25 U.S. cents per gram, Eucrisa is US$9.67 per gram, according to the Telus Health report. Clinical research is also underway to determine if psoriasis is a secondary indication for the drug. While it would likely be more expensive than topical treatments, it could be significantly cheaper than biologic drugs.

Read: What to do about biosimilars?

Like migraines, eczema is a common condition. Telus Health noted up to 20 per cent of the population suffers from it. But while new therapies to treat it are pricier than current options, high-cost specialty drugs remain the largest contributor to spending growth, says Patel.

The U.S. Food and Drug Administration recently approved three gene therapies for rare diseases, including blood cancers and retinal dystrophy. They’re similar to the hepatitis C medications in that they’re one-time treatments, but they cost even more. Yescarta treats adults with a type of non-Hodgkin lymphoma and costs US$373,000. Kymriah, which treats certain kinds of leukemia in children and young adults, costs US$475,000. And Luxturna, a gene therapy for retinal dystrophy, costs US$425,000 per eye. 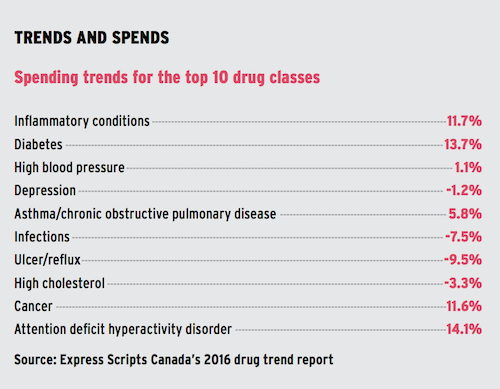 “The good news about them is they can be targeted therapies towards individuals who will benefit from them the most,” says Goguen, adding that “from a sustainability and affordability standpoint, it’s something that plan sponsors or employers just won’t, in many cases, be able to bear.”

Health Canada hasn’t yet approved those therapies, but rising costs have led some payers to consider alternative funding models. One possibility is a pay-for-performance scheme. In the United States, for example, the Centers for Medicare & Medicaid Services will only reimburse for certain drugs if patients respond by the end of the first month of treatment.

Medavie Blue Cross has a number of pay-for-performance agreements in development, but Goguen notes they aren’t possible for all therapies. “They need to be done with the right types of drugs when there are clear outcomes you can evaluate,” he says.

“There are some cases in oncology where it’s quite clear at a certain point in the treatment plan that there’s a response or non-response,” he adds. “We are [also] seeing it with some of the biologics, with rheumatoid disease and diabetes. It’s early days in designing these types of programs.”