Before the CAAT plan hired its first CIO in 2004, it was using an outsourced chief investment officer-type model — although it didn’t use this term at the time — and investments were largely run by consultants.

Since the plan introduced the CIO position, the role of the board’s investment committee has shifted from focusing on day-to-day tasks, like selecting investment managers, to focusing on investment policy and risk, says Cays.

“The day-to-day management and selection of managers, for the most part, and allocation within the asset classes is done by my team. And so the big risk, which is the investment policy and the mismatch with the liabilities, is where the investment committee and the board are focused.”

Getting to know: Julie Cays

Previous experience: Various roles at the Canadian Imperial Bank of Commerce and the Healthcare of Ontario Pension Plan

What keeps her up at night: Continuing to find opportunities with a competitive edge

Out of the office she can be found: Cooking

In 2005, the CAAT plan made its first foray into non-public markets.

“[The first CIO] took a scan of private equity, hedge funds, real estate [and] infrastructure, and determined that infrastructure was the place to start, largely because the U.S. plans hadn’t discovered it,” says Cays. “Definitely, it was being done in Australia. Definitely, other Canadian plans had been doing it. But the Americans, which is such a huge mass of capital, hadn’t really discovered it.”

The plan started its private investments with infrastructure funds and then broadened that out to private equity and real estate a few years later.

Its infrastructure investments are fairly global while the private equity side has been more focused on Organisation for Economic Co-operation and Development countries, says Cays.

In 2005, the plan’s initial allocation to infrastructure was three per cent, but now it has combined real estate and infrastructure into a real assets portfolio targeting 20 per cent. For private equity, the plan initially started with a five per cent allocation, but is now targeting 15 per cent.

“So total in non-public markets is going to be 35 per cent and we’ve probably got another five years before we actually get to target, particularly on private equity,” adds Cays.

These allocations are largely coming from public equity, she says, noting total equity allocation, including private equity, has been reduced from 57 to 52 per cent. Real estate, however, took a piece from both equity and fixed income.

“I’m still such a believer in the private markets because they are actually an increasing proportion of the equity capital markets out there because there are fewer companies going public over time,” says Cays. “So it’s such a huge opportunity set and an opportunity to really think long term and really get good managers changing companies up and adding value.” 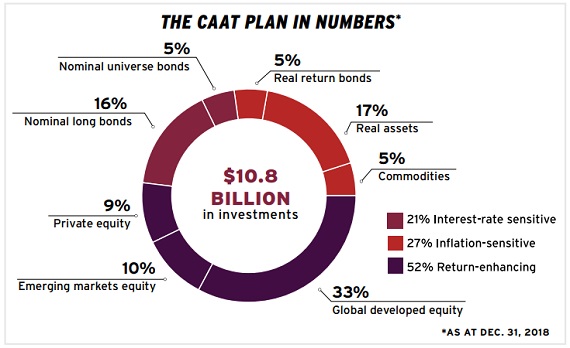 When it comes to private equity and real estate, the CAAT plan is a co-investor. “We are not the lead or majority owner of any of the assets in our co-investment portfolio, but we’re over a third in co-investments in infrastructure and approaching that in private equity,” says Cays.

And the board has played a huge role in this success, she adds, highlighting that it’s been nimble because it needs to approve co-investments above a certain percentage of assets and look at the due diligence process on new general partners in the private markets space. “And where we need to have a quick turnaround, they get on the phone for an investment committee conference call.”

Particularly on the co-investment side, the CAAT plan’s board has been key, says Cays. “A lot of investors say, ‘Yeah, we want to co-invest because we don’t have to pay the fees that we do in the funds.’ But once push comes to shove, they haven’t been able to transact because their governance is getting in the way. Ours has not gotten in the way at all, and so we do get the calls now on co-investing.”

Which emerging and frontier markets are institutional investors considering in 2022?

The uniting theme at the 2022 Defined Contribution Plan Summit was financial wellness, a chief concern for any employer that offers a pension plan to...

Nearly a third (30 per cent) of insurers are making changes to ensure there’s diversity among the medical providers within their networks, according to a...

In the midst of historically high inflation and ahead of a possible recession, it’s important for employers to offer benefits like financial counselling and flexible spending...

There’s no question that Canadians value their private health benefits, even with pharmacare discussions back on the table. In a recent Abacus Data study, 78...

The Caisse de dépôt et placement du Québec is leading a funding round for a customer engagement software provider. During a US$105 million investment round...