Despite his death earlier this year, Ikea founder Ingvar Kamprad’s influence lives on at the international furniture behemoth.

The notoriously frugal Kamprad reportedly flew economy class, whether for company or personal travel, and drove an old Volvo. The iconic Swedish retailer remains committed to operating within the guidelines set by his 1976 treatise, “The testament of a furniture dealer,” in which Kamprad extolled the virtues of simplicity, differentiation and achieving good results with small means.

More recently, Ikea employees felt Kamprad’s impact with the creation in 2014 of the Tack! loyalty program. The program reflects the founder’s desire for employees to share in the company’s worldwide success.

Tack, which means thank you in Swedish, commits Ikea to making an additional contribution to employees’ individual retirement plans when the business hits global performance targets set in advance.

For the 2017 fiscal year, the company paid out $145 million to employees around the world. In Canada, that translated to $1,453.60 for each full-time employee with at least one full year of service, irrespective of salary level or seniority within the company. Part-time workers received proportional payouts according to the number of hours they worked.

The program operates as a deferred profit-sharing plan in Canada and is in addition to existing registered retirement savings plan programs, says Stephen Bobko, Ikea Canada’s national human resources manager. Bobko says the main goal of Tack! is “keeping co-workers with us at Ikea.”

“For us, it has become our anchor in loyalty,” he adds.

Ikea isn’t alone in embracing deferred profit-sharing plans as part of its retirement offering. Last year, in the annual report on suppliers of capital accumulation plans, Benefits Canada revealed the number of sponsors providing deferred profit-sharing plans had exploded in the last decade, jumping by around 112 per cent since 2007 and outpacing the growth of defined contribution arrangements over the same period.

That can result in significant savings for plan sponsors compared with contributions to arrangements that count as taxable benefits, particularly if a high proportion of employees earn less than the year’s maximum pensionable earnings, which for 2018 stands at $55,900. 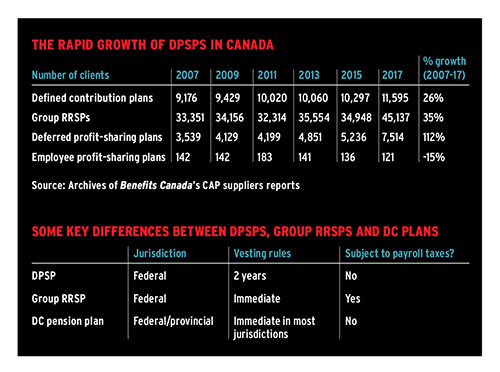 Wright, however, says the products really took off in the last five years after a series of changes left deferred profit-sharing arrangements as the only type of capital accumulation plan with the ability to include a vesting period. As a result, employers can get back any contributions they made to the plan if an employee departs within two years
of joining.

“When vesting is eliminated in all the other types of plans, this becomes a great way for employers to attract, reward and retain good people,” says Wright. “It’s a bit like when target-date funds came into the arena. They took a little while to catch on, but now they’re almost a default in plans. The same thing is happening with DPSPs, and there aren’t too many employers starting a new plan today who don’t use one.”

Jim Yih, a retirement consultant at Edmonton-based Clearpoint Advisory Group Inc., says employers can engineer their plan entry requirements in tandem with the vesting period of deferred profit-sharing plans to encourage employees to stick around for longer.

“You can really curb the cost of employee turnover, but it’s not just about retaining control over contributions. As an employer, hiring new employees who leave very quickly can be very expensive. It’s a big investment to train someone and get them up to speed only to see them leave in a year or two,” he says.

“It’s a good way to provide employees with tax-sheltered savings, without all the regulatory burden of a registered pension plan,” he says.

Yih says about three-quarters of all new plans set up by Clearpoint involve that kind of combination arrangement. And despite the name, he says it’s becoming rarer to see deferred profit-sharing plans like Ikea’s with the direct link between company profits and the employer’s contribution.

“They used to be used primarily for profits but not so much anymore. In new plans, they are there mainly for the purpose of employers’ matching contributions, while retaining control over the funds during the vesting period,” he says.

Nunes says purely profit-focused plans aren’t necessarily a good way to serve as an employer’s sole retirement savings vehicle due to the unpredictability of contributions. “I’m more in favour of a registered DC pension for the locking-in aspect of it, but if the employer and employee are putting in nine or 10 per cent of pay between them into retirement funds — however it’s divided up between group RRSPs and DPSPs — then it has potential,” he says. “That’s the minimum that people need to save these days to get a decent benefit.”

According to Vancouver-based pension consultant Greg Hurst, Ikea’s decision to pay all full-time employees an identical sum is another unusual feature of its plan. He says plan sponsors have great flexibility to determine the contribution level for each employee, noting many will use a formula that takes salary, length of service and any number of other factors into account.

“My advice is always to match the vehicles used for your retirement savings according to your own purposes and objectives,” he says.

That’s exactly what the equal Tack! payments do for Ikea, according to Bobko.

“First and foremost, it comes back to Ikea’s key values, and one being simplicity,” he says. “That’s why I think it’s so meaningful. There’s such power in that in terms of how we see our brand.”

Still, Bobko says there are other components to the company’s total rewards program that vary on an individual basis. For example, the company’s One Ikea bonus delivers an annual payout as a percentage of salary based on the performance of the entire Canadian division. Its total rewards also include a group RRSP, as well as popular subsidized meal and store discount programs for employees, he adds.

Bobko says retirement programs and benefits are central to Ikea’s recruitment and retention efforts, particularly as it prepares for expansion in the Maritimes and Quebec over the next year.

“We really look at driving our business and our people in tandem,” he says. “We want to continue to take a leadership position, and how you do that is by looking for opportunities to be unique and meaningful in your rewards program.”

Michael McKiernan is a freelance writer based in St. Catharines, Ont.

Inflation break-evens at multi-year highs and higher nominal yields are putting some upward pressure on real yields in Canada, according to a new report by...

A first-quarter rally in both the equity markets and bond yields have propelled defined benefit pensions to their best funded positions in more than a...

Sobeys Inc. is reinstating a lockdown bonus for employees in areas with renewed stay-at-home orders, said a statement by the grocery retailer, which also noted...

A recent ruling on federal carbon pricing sparked a lot of loud talk on both sides of the aisle, but the impact on institutional investors...

Specialty drugs can significantly improve (or even save) an employee’s life, but can come at a high cost. Over the past few decades, many employers...