Twenty years ago, Jim Keohane was brought into the Healthcare of Ontario Pension Plan to launch its derivatives program. Since then, he’s climbed his way to the role of president and chief investment officer, grown his reputation as a trailblazer in liability-driven investing and navigated the pension fund through the financial crisis with positive returns.

“Prior to me being here, HOOPP had never done a derivative transaction so I was brought in for that reason,” he says. And now, the HOOPP is known around the world for its LDI strategy, which has derivatives at its core.

The LDI strategy began as a result of the technology meltdown of 2000- 2002, when the HOOPP quickly moved from surplus to deficit, says Keohane. “Effectively, our assets and liabilities moved in a different direction, so the liabilities went up and the assets went down, which is kind of the perfect storm, if you will, and we tried to think about ways that we could reduce that mismatch.”

The HOOPP’s previous derivatives transactions had allowed it to separate alpha and beta, using the arrangements to break a portfolio down to its component return streams, he says. “If you wanted to break down a portfolio into its component returns streams, you could think of it along the lines of the capital asset pricing model: risk-free, plus beta, plus alpha. Risk-free for us is long-term bonds, essentially. Beta is your exposure to risky asset classes, so you can get that through derivatives. So rather than actually physically being invested in equities, you can actually get that using equity index futures or options or swaps. And then alpha is any active management strategy.”

Typically, alpha is security selection, notes Keohane. However, a plan can use any absolute return strategy to substitute stock selection. This allowed the HOOPP to build its portfolio based on the building blocks as opposed to asset classes.

Most of the pension fund’s physical assets are in a liability-matching portfolio, with interest-rate sensitive and inflation-sensitive assets, such as real-return bonds, long-term bonds and real estate.

GETTING TO KNOW JIM KEOHANE

What keeps him up at night: High valuations

Outside of the office he can be found: At his country property in Caledon, Ont. or travelling with his wife

Then, as part of its return-seeking, the HOOPP layers on equity and credit exposure using derivatives, as well as internally executed absolute return strategies. The strategy also includes private equity.

The LDI approach allowed the plan to beat the financial crisis and produce a positive return for 2008 and 2009 combined, highlights Keohane.

Also, after looking at risk and stress testing, the HOOPP made a shift in 2007, moving 30 per cent of its money out of equities into long-term bonds and real return bonds. “We actually didn’t get very badly hurt because of that,” says Keohane. “And that actually benefited us quite a bit because being in a defensive position enabled us to buy long-term assets in 2008 at very attractive prices that benefited the fund for several years after that.”

A key differentiator to the plan’s approach is thinking about itself more as a pension delivery organization than an asset management organization, he notes. “And that sounds subtle, but it’s actually pretty profound because it refocuses you in terms of what you should be doing. It’s not just about beating markets, it’s about delivering on the pension promise.”

Keohane is set to retire from the HOOPP in March 2020. 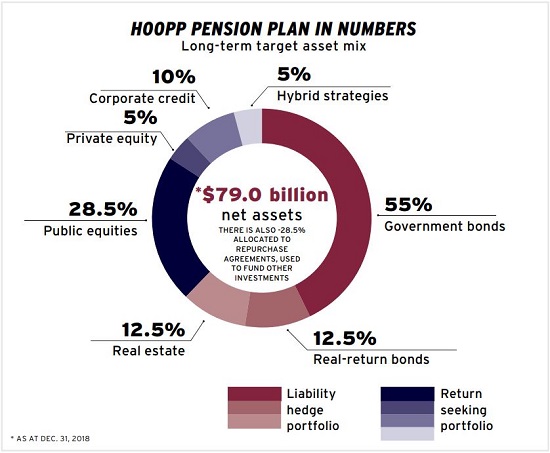