In search of better risk-adjusted returns, the York University Pension Fund decided to look beyond Canada’s borders, shifting its equity allocation to be 100 per cent global.

The fund is a hybrid defined benefit and defined contribution plan, with the benefit level depending on the rate of return and a minimum guarantee for members. Its investments, which are managed like a DB plan, are made through pooled funds or limited partnerships by a small team of four people.

“Our fixed income allocation used to be fully Canadian,” says Leona Fields, director of the university’s pension fund. “We now have a global aspect to it. We still have a majority of it in Canada and our equity was regional and now it’s all completely global.”

In 2016, a review of the investment policy led to the recommendation for a fully global structure, with the expectation of the same or higher returns with lower volatility.

“Overall, we would have a better risk-adjusted performance and the idea is that, if you give investment managers more flexibility and full [discretion] to invest anywhere in the world where they see the opportunities, then the expectation is that you’re going to have a more efficient portfolio,” says Fields.

Getting to know
Leona Fields

What keeps her up at night: The current bull run in the equity markets and the likelihood of another downturn

Outside of the office she can be found: Camping, reading
and cycling

The actual implementation was a big deal, she notes. “When we had the recommendation to move to global, the next stage of the discussions were, ‘While OK, that’s great, but what does that mean? What will the structure look like? How many managers will we have?’ And so we did a significant amount of work in that area looking at different types of options, number of managers, size of portfolios — and we came up with the recommendation at the end of that process to implement a core satellite structure where we have a low volatility core and satellite portfolios of very active, highly concentrated, benchmark agnostic, actively managed global equity portfolios.”

Next, the organization hired a transition manager because the move was very complex, including changing from seven to five managers and moving more than $1 billion. “It was a huge transition, but it actually went very well and that was completed just over two years ago,” says Fields.

She notes the importance of ensuring the various portfolios fit well together. “It’s all about diversification and complimentary portfolios because if you don’t put them together well, then you just end up with the benchmark. And that’s definitely what you don’t want.”

Generally, since moving to a more global strategy, the changes have met expectations, she says, with the plan seeing lower volatility in its equity portfolio as well as higher returns. 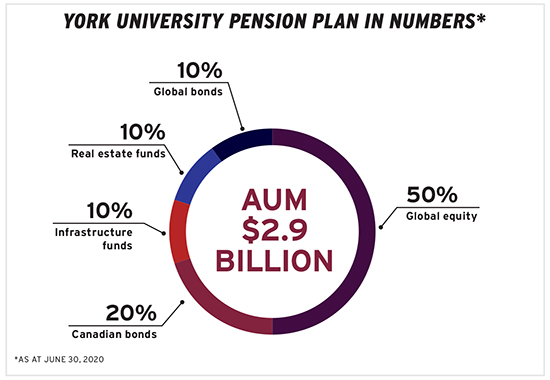 Yaelle Gang is the former editor of the Canadian Investment Review.

An article on Canadian employers increasing salaries and offering remote work to attract talent was the most-read story on BenefitsCanada.com over the last week. Here...

A fifth (19 per cent) of U.S. employees say they’ve adjusted their retirement strategy and are taking a more conservative savings approach amid economic uncertainty,...

Caisse reporting negative 7.9% return for first half of 2022

The Caisse de dépôt et placement du Québec generated an average return of negative 7.9 per cent for the first half of 2022. The investment...

Apple Inc. is making sudden changes to its return-to-workplace strategy for office-based workers. The policy, set to first take effect at the company’s Silicon Valley...