Over the past several months, much attention has been paid to the coronavirus pandemic’s impact on financial markets and, subsequently, defined benefit pension plans’ financial conditions — but what about the potential financial implications arising from the virus’ effect on mortality rates?

When performing a pension plan’s actuarial valuation, the actuary uses a number of assumptions, including one regarding the future rates of mortality of the pension plan population. Since a DB pension is payable for the lifetime of the plan’s retirees and beneficiaries, the mortality assumption is important because it affects the length of time pensions are assumed to be paid from the plan.

The first mortality-related financial effect of the coronavirus crisis on a pension plan to consider is the impact of excess deaths that may have already occurred among the plan population since the onset of the global pandemic in early March 2020. If the actual number of deaths has exceeded the assumed number of deaths in the actuary’s most recent valuation of the plan prior to the onset of the pandemic, then a mortality experience gain and a reduction in plan liabilities — all else being equal — will be revealed when the next valuation is performed. For example, if the number of deaths of a pension plan’s retirees and beneficiaries in 2020 was significantly higher than expected, a Jan. 1, 2021, valuation of the plan will likely reveal a mortality experience gain.

Read: How are global retirement systems faring in the wake of coronavirus?

Unfortunately, the pandemic has had a significant effect on the number of deaths in Canada. The chart below shows the weekly actual number of deaths compared to the expected number of deaths in Canada during 2020. It should be noted that the information in the chart doesn’t attempt to identify deaths caused directly by the coronavirus. Therefore, it also captures possible indirect effects of the pandemic, such as potential deaths due to delays in the diagnosis and treatment of other illnesses and increases in deaths due to overdoses. 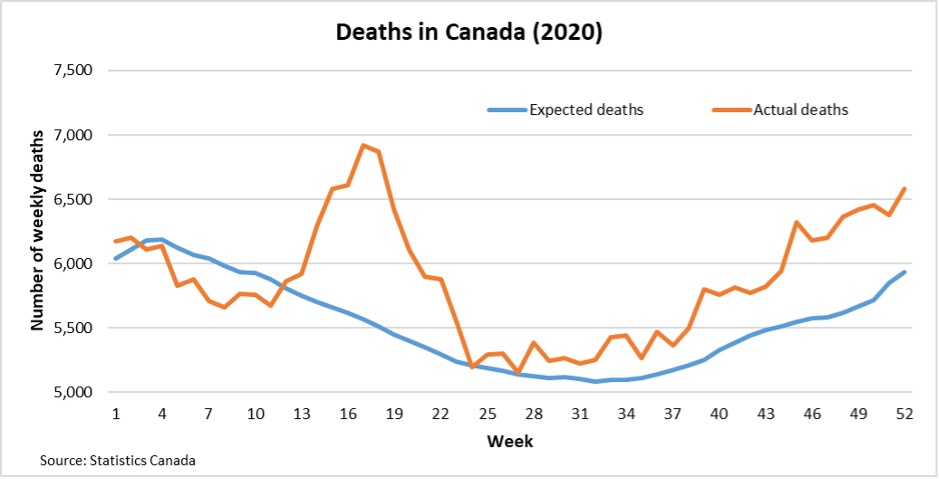 One would also expect the variation of excess deaths between individual pension plans is large. Anecdotally, some pension plans have experienced excess deaths in 2020 and early 2021, while other plans have seen no such effect. The financial impact of excess deaths also depends on the ages and sizes of the pensions of the retirees and beneficiaries who died during this period. Therefore, it will be difficult for a plan sponsor to anticipate the effect the pandemic has had on the mortality experience of their pension plan without first examining updated membership data.

The following are a few thoughts regarding the potential effects of the pandemic on future mortality rates:

2. There’s a possibility mortality rates will increase in the future due to the pandemic for reasons that include the following:

3. It’s also possible that because the most severe effects of the coronavirus are often experienced by individuals with pre-existing conditions, individuals who survive the disease will tend to be those who don’t have pre-existing conditions and may therefore exhibit lower mortality rates in the future. We may also see reductions in mortality rates due to new patterns of behaviour and public policies influenced by the pandemic, such as wearing masks in public and possible reforms to health-related protocols at long-term care homes.

When monitoring a pension plan’s financial condition and selecting valuation assumptions for the plan, actuaries and plan sponsors should consider the effects of the pandemic, including any mortality-related effects. With regards to these effects, both the excess deaths due to the coronavirus crisis that may have already occurred and the potential effect on the future mortality rates of the plan population should be considered.

Read: How are pension plan sponsors’ fiduciary duties evolving in the time of coronavirus?

Different conclusions can reasonably be drawn as to whether valuation mortality assumptions should be adjusted due to the pandemic. However, given the uncertainties about the future effects of the disease, the preferred approach at this time may be to maintain an unadjusted mortality assumption, while closely monitoring mortality patterns of both the plan sponsors’ pension population and, more broadly, adjusting the assumption in future valuations if warranted.

Coverage of the 2022 Mental Health Summit

For more than 16 years, Benefits Canada has recognized the importance of workplace mental health by hosting the annual Mental Health Summit, the industry’s most popular and...

Working on the frontlines of the coronavirus pandemic day in and day out, health-care workers experienced significant mental-health challenges over the past two and a...

While traditional therapy benefits and virtual-care options are now table stakes in benefits plans, there’s more employers can do to equip employees with the resources...

Canada has done a good job at reducing the stigma around discussing and seeking help for mental-health challenges, but two-thirds of Canadians who are struggling...

Canada ranks 39 out of 43 countries for vacation day offering: report

Canada ranks No. 39 out of 43 countries for vacation day offering, tied with Costa Rica and Japan, according to a new report by Comparethemarket.com....

Coca-Cola Canada Bottling Ltd. is expanding its coverage for mental-health and family-building benefits as part of its strategy to incorporate diversity, equity and inclusion throughout...

The possibility of a global economic slowdown is of greater concern to global institutional investors than rising inflation, according to a new survey from the...

U.S. President Joe Biden is announcing the infusion of nearly US$36 billion to shore up a financially troubled union pension plan, preventing severe cuts to...