This mandate isn’t a simple one. On one hand, the HOOPP boasts a solvency ratio of 120 per cent and uses a liability-driven investment model that helped its 10-year annualized rate of return hit 11.06 per cent as at Dec. 31, 2021. On the other, Wissell’s predecessor Jeff Wendling — who stepped into the position of president and CIO following the 2020 retirement of Jim Keohane — had made it clear the plan would be asserting the advantages of scale and ramping up its involvement in alternative asset classes. 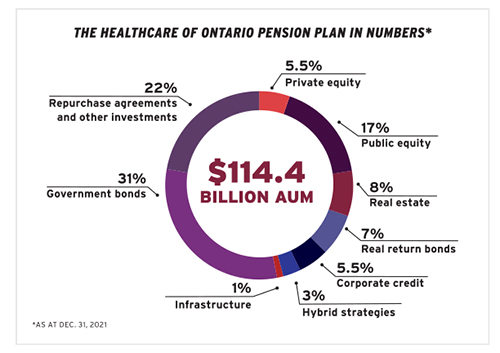 Getting to know
Michael Wissell

What keeps him up at night:
Inflationary pressure and how the central bank reserve system will respond to the unusual economic circumstances facing the global economy

Outside the office he can be found:
Sailing, playing golf and having a glass of wine with friends

He’d also witnessed the transformation of Canada’s pension sector during the late 1990s and early 2000s. Back then, the very idea of the Canadian pension model didn’t exist, but executives at many of the country’s largest public sector plans were about to change that. As these pension funds moved away from government bond-dominated portfolios and toward more ambitious strategies, the executives started sourcing talent from other areas of the financial sector.

Wissell, who had worked in trading rooms in client management and trading roles for the Toronto-Dominion Bank for 15 years, was one example. “Through that role, I became familiar with the emerging Canadian pension model. The people involved with it seemed to engage in a breadth of activities and have multiple responsibilities.”

Driven by the opportunity to expand his responsibilities and by a desire to help people achieve retirement security, Wissell joined the Ontario Teachers’ Pension Plan in 2002. “I joined as an equity derivatives and foreign exchange expert — that was very much a part of the product set. Canadian plans are heavy users of derivatives. I was fortunate enough to have a great experience there.”

This understanding of pension plan transformation was exactly what Wendling was looking for in a CIO. It also didn’t hurt that Wissell had a clear vision for what it meant to be an effective CIO — both at the HOOPP and in general.

“What makes a good chief investment officer for a Maple 8 plan?” asks Wissell. “It’s breadth. I’ve had breadth of exposure to various asset classes and can communicate with all our teams and bring [them] together effectively — though it took me 30-odd years to develop that.”

“Our focus is on strategies that scale and that requires more people in our private equity platform. When I started, [the entire investment team] had only 62 investment professionals. We now have more than 100 — and that number is growing.”

Wissell is also focused on preparing the HOOPP to deal with the prospect of rising interest rates and inflation. “The inflationary regime is an ongoing challenge. Whether it’s transient, persistent or pervasive, I’m not sure anyone knows. But we did have to confront our portfolio’s approach to fixed income, which turned out to be a good decision.”

Going forward, he’s invigorated by the prospect of meeting these challenges on behalf of the plan’s more than 400,000 members. “We are so appreciative of what they all do. When you look in their eye and see that they are appreciative of what we’ve done for them, it makes your heart glow.”

The Caisse de dépôt et placement du Québec is partnering with an asset manager to provide a credit facility to an electric vehicle subscription service....

Vancouver City Savings Credit Union is supporting employee well-being by increasing its coverage for mental-health benefits from $1,500 to $10,000, per employee and per dependant....

As the coronavirus pandemic prompted a meaningful change in how employers communicate with their workforces, Telus Communications Inc. reviewed job types and created personas around...

Nearly two-thirds of institutional investors say they’re planning to increase their allocations to real assets over the next two years, amid a backdrop of inflation...