In 2014, Colyn Lowenberger, then the director of pension and disability administration at the City of Regina, heard a knock at his office door — it was opportunity.

After walking into the room, the chair of the Regina Civic Employees’ Superannuation and Benefit Plan asked Lowenberger to discuss a list of concerns about the defined benefit pension plan. The board was concerned about the plan being administered by municipal employees, which led to distrust among members. The municipality also couldn’t compete with corporate salaries, leaving the plan sponsor struggling to retain talented investment professionals.

Getting to know
Colyn Lowenberger

Previous roles:
Director of pension and disability administration, the City of Regina

What keeps him up at night:
The state of public equity markets — and if institutional investors have been wrong about private markets

Outside the office he can be found:
On his bicycle because it doesn’t require thinking very hard

“‘Here’s a list of problems I want to solve,’ he said. ‘Do you have any ideas?’” recalls Lowenberger, now the founder, president and chief executive officer of Möbius Benefit Administrators Inc., who gamely replied: “I think I might have an idea.”

He proposed the creation of a private, third-party administrator, which would be owned by its pension fund members. “We felt government shouldn’t be involved and wanted to make it so the plans would have a stake in the company. This would also provide some flexibility to add to the client base.”

With the support of the RCESBP chair, Lowenberger began moving forward with creating Möbius. In the process, four more Regina-based pension plans joined. Two of its member-owners — the RCESBP and the Regina Police Pension Plan — are DB plans. Two others — the City of Regina’s Casual Employees’ Superannuation and Elected Officials Money Purchase Pension Plan and the Regina Civic Employees’ Long Term Disability Plan — take a defined contribution approach. And the Target Retirement Income Plan for the Regina Police Service uses a target-benefit model.

“We wanted to staff up to do the job properly, but in a small market, that isn’t easy,” he says. “I thought, if we can’t hire the right people, let’s make them. We‘ll take [students] from the actuarial program at the [University of Regina] for 16 months. We get a chance to build the skills we want.”

Despite these challenges, Lowenberger managed to build an 18-person team — one identical to his former team with the addition of four promising investment analysts — in time for Möbius’s 2016 launch. As a first-time business owner, it took him a while to get the formula right.

“For a long time, there was a running joke that we were the best training grounds for [the Saskatchewan Healthcare Employees’ Pension Plan, the province’s largest multi-employer pension plan]. . . . It took us a while to get the compensation right — and now we maintain a friendly rivalry with SHEPP.”

Since its launch, Möbius has performed well for the plans’ 15,800 members, with a 2021 survey showing 97.7 per cent of its trustee clients would recommend the company to other plan sponsors. Part of this loyalty relates to investment success, with the organization’s assets under management expanding from $1.8 billion in 2016 to $2.4 billion at the end of 2021 — an annual growth of about seven per cent.

While the team controls a small bond sleeve, most of its investing is performed by 22 asset managers. “Our position is that, if you have a good relationship with an asset manager and like the team and its process, there isn’t a good reason to start experimenting with someone new,” says Lowenberger. 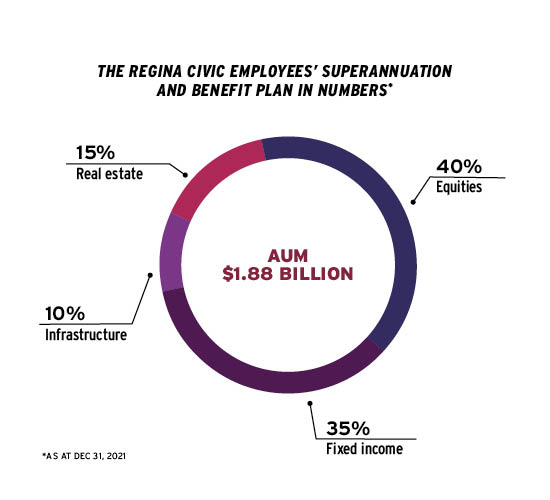 Due to concerns about overfunding, the Target Retirement Income Plan for the Regina Police Service’s excess assets are used to pilot growth strategies, including some alternative asset classes focused on timberland and agriculture investments. “The target-benefit one is like my favourite toy,” he says. “There’s so much I can do with it. It’s really helpful with other plans to be able to say, ‘Look, we did that with another plan and it worked.’”

Read: Are target-benefit pension plans the answer to a secure, sustainable retirement?

According to Lowenberger, the most exciting of these strategies is focused on European real estate. “It’s a space that we concluded faces a supply problem. I think it’s the regulatory environment — the hoops you go through are insane.”

Another reason so many trustees would recommend the organization’s services is the fact that it prioritizes transparency. Where most annual reports use turgid language and intimidating charts, Möbius’ writing is accessible and supplemented with plenty of colourful infographics.

The desire for openness dates back to before the organization’s launch. “We wanted to be fun, light and friendly. I had a vision of what I wanted to do, but I picked a committee of employees who determined our values. . . . They built the foundations of who we are.”

Telus Communications Inc. is training its people leaders to recognize when employees are experiencing mental-health struggles. The organization provides leaders with scripts to refer to when they...

Financial education and well-being initiatives are in the spotlight as employees face the stress of multiple financial headwinds — from inflation reaching a 40-year high...

Half of Canadian employers increasing salary budget for 2023: survey

Half (48 per cent) of Canadian employers say they’re increasing their salary budget for 2023, according to a new survey by Normandin Beaudry. The survey,...