As a nuclear power provider, Bruce Power’s culture emphasizes the importance of risk-averseness. This is reflected in the company’s efforts to secure the indexed benefits offered to its 6,500 defined benefit pension plan members.

“We have many, many checks and balances in place — not just on the operational side, but also when it comes to finances,” says Simon Fréchet, Bruce Power’s chief investment officer of retirement programs.

This wasn’t always the case. Until 2006, the company didn’t have an internal role dedicated to monitoring its pension plan’s then $1.5 billion in assets under management. That changed with the hiring of Fréchet. After starting his career in pension investing in the U.K., he moved to Canada in 1989. In the mid-1990s, became interested in investing and was certified as a chartered financial analyst. In 2000, he joined SEI Investments Canada. in a role running asset-liability studies. When he joined Bruce Power, Fréchet knew this experience would help him analyze the nuclear power giant’s approach to investing. After looking at the pension fund’s allocations, he knew where to begin.

“About 70 per cent of the fund was in equities with 40 per cent allocated to Canadian equities. I put Bruce Power through its first asset-liability study, which led to some sweeping changes.”

Getting to know
Simon Fréchet

What keeps him up at night:
“Being prepared for uncertainty is better than worrying about what’s yet to come.”

Outside the office he can be found:
Listening to his collection of vinyl records or playing one of his bass guitars.

“By the time we hired our last equity manager, the [2008/09] financial crisis was starting to play out. That year, we were down 12.5 per cent, but that put us in the top quartile of plans in terms of performance.”

In the months that followed, Fréchet focused on rebalancing the portfolio. As the crisis played out, he was keen to position the plan for the rallying of equities, but wasn’t willing to give free rein to its asset managers.

“We were dedicated in terms of our rebalancing rules — we did it religiously with a plus or minus three per cent tolerance. We were taking money away from bonds and putting it into equities. When equities started taking off, we were well-positioned right out of the gate.”

As markets began to recover, Fréchet conducted more asset-liability studies looking into real return bonds and emerging markets, tweaking the asset mix with the results. He also sought out the wisdom of his peers — including other members of the Pension Investment Association of Canada, where he’s served on several committees and as board chair. “[PIAC is] about coming together as pension investors to solve the issues we all face. You can find out a lot about how to do things, just by chatting with other members.” 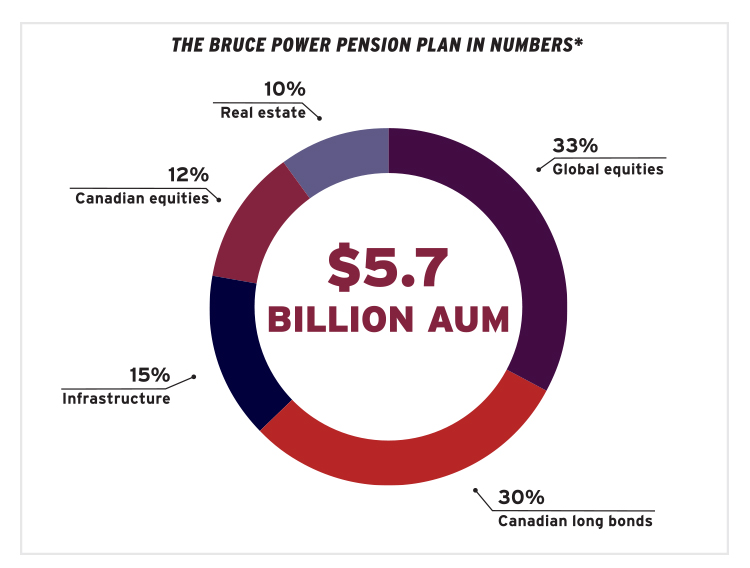 Fréchet says he often stumbles on inspiration during interactions with fellow PIAC members. One such conversation, on alternative asset classes, led to a major shakeup at Bruce Power’s pension plan. “We made the move to get into real estate and infrastructure. That’s been our focus over the past four years.”

Today, the plan allocates 10 per cent of its capital to real estate, which is overseen by four regional managers. It also allocates 15 per cent to infrastructure investments. “We use a combination of closed-end and open-end infrastructure funds,” he says. “It’s a bit higher octane than our real estate investments. We do focus on leverage and ensuring there isn’t too much concentration in any one area.”

In Fréchet’s 15 years overseeing the pension plan, it’s grown to about $5.7 billion in assets with its solvency ratio approaching 100 per cent. When it crosses that funding threshold, he will embark on his next mission.

“From a returns perspective, we did quite well in the pandemic. When the discount rate decreases, however, our liabilities grow tremendously. In the future, we will be looking at further derisking the plan.”