The best ship captains don’t put too much faith in weather forecasts — or those who do tend to see their vessels flounder.

Perhaps that’s why the Canadian Broadcasting Corp. has a skipper, Duncan Burrill, at the helm of its pension plan. Even when he’s away from his much-loved sailboat on the banks of the Ottawa River, the managing director and chief executive officer remains skeptical of forecasts.

“We can’t predict interest rates. We don’t feel we have the capability. For that matter, we don’t feel there are many people who can actually do that with any degree of certainty.”

This skepticism is one of several qualities that marked Burrill as the appropriate successor to Debra Alves when she retired in 2018. According to Alves, Burrill’s commitment to continuous improvement and focus on risk management also played a role in his promotion to CEO. Most importantly, to Alves, Burrill knew something other candidates didn’t. 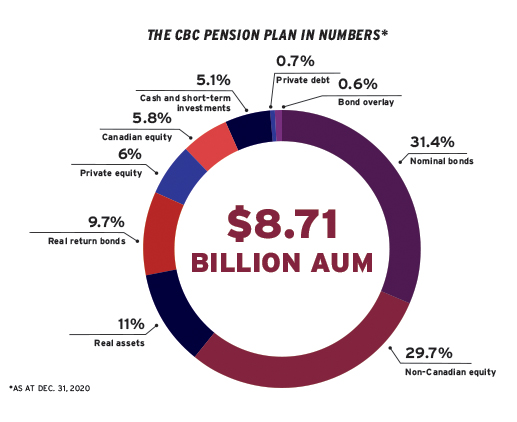 “He understands our unique culture,” she says. “We are a mid-sized pension plan with an in-house investment and operations team and a long, proud, lucrative history of being an early mover on innovative investment ideas.”

Getting to know
Duncan Burrill

What keeps him up at night:
“The No. 1 investment issue we face is that we’ve had huge amounts of monetary stimulus. It’s created asset price inflation. Everything seems to be priced to perfection at this point. We’re a pension plan that has hedged a lot of our interest rate risk exposures and, as such, we would incur hedging losses if interest rates were to rise. While we don’t believe that anyone can forecast the future with any accuracy, we know fixed income could have negative returns for years. We have to be prepared for that. I’m not a giant bear on equity markets, but at the same time, it seems they are priced very richly. If the value of our return-seeking assets goes down, our funded status would go down accordingly. However, our LDI investment strategy is designed to limit the impact of these events.”

Outside the office he can be found:
“Road biking. I also enjoy spending time with my family. We have a small sailboat on the Ottawa River which we use as the ‘happy spot’ to recharge the batteries.”

As a mature fund, the $8.71 billion pension plan’s members contribute roughly a third of the amount drawn upon by retirees, a situation that requires careful navigation. “To manage in an environment where we are paying out three times as much as we receive, we really have to be in line with who we are,” says Burrill. “We aren’t a generic asset management fund. We are a pension plan with a core purpose of meeting the pension promise to members at the lowest current service cost.

“We have three groups of members [to whom] we are trying to fulfill our fiduciary duties. Members paying in want to pay the lowest amount possible. Retirees drawing from the fund want to make sure their pension is stable and secure and that they will get every dollar that is owed. The sponsor wants to have stability of contributions; they don’t want to make extra special contributions.”

To balance its duties to all stakeholders, the CBC Pension Plan adheres to a strict liability-driven investment model that was first implemented in 2005. “LDI is simply the best mechanism for achieving our goals. When we first adopted it, there weren’t many people doing it, but it’s worked out quite well.”

Designed to protect the plan in the event of an array of market disruptions, the model is made up of return-seeking and hedging strategies, using a bond overlay for the hedging component. With the fund’s solvency and going-concern ratios beginning 2021 at a healthy 104.6 per cent and 161.4 per cent, respectively, there’s little question the LDI approach is working.However, for all the stability the model has delivered, Burrill admits it can be difficult to resist being lured off course by financial opinion pieces. “We’ve gone through the self-doubt a million times as to whether interest rates have bottomed and if hedging is going to turn into hedging losses. But that’s really moving away from our belief that we can’t predict interest rates.”

The LDI model offers another advantage, according to Burrill, who sees it as particularly well-suited to providing plan members with peace of mind. “We have a significant number of journalists and people who follow the news. When an unexpected world event happens, we get asked how it will affect our bottom line. Our LDI approach means that when the world changes, we are not susceptible to be out of phase.”

Burrill’s risk-averse instincts don’t only have an impact on how funds are allocated. Well before the global coronavirus pandemic, the organization’s business continuity plan required the whole team to spend a day working from their homes. Like most other businesses, it moved to a mostly work-from-home model in 2020. “It has worked incredibly well,” he says.

While his crew may have taken to its extended shore leave with grace, Burrill believes it’s important to eventually return to the office at least part of the time. “We are knowledge workers in a creative industry. Lots of research shows the cross-fusion of ideas that happens in an office setting, the ad hoc meetings in the hallway or by the water cooler.”

Editorial: It’s time to embrace the many workplaces of the future

Head to head: Should Canada implement a four-day workweek?

More than half (55 per cent) of U.S. working parents say they aren’t receiving enough support from their employer while having to care for their...

The real estate arm of the Ontario Municipal Employees’ Retirement System is entering a long-term strategic partnership to develop commercial laboratories in France. In the...

Only one per cent of institutional investors described their organizations as non-adopters of environmental, social and governance investing criteria, according to a survey from Capital Group. The...

Cadillac Fairview is adopting a series of sustainable investing goals to help its portfolio achieve carbon neutrality by 2050. The real estate arm of the...

Close to half (45 per cent) of Canadians say the ongoing coronavirus pandemic has negatively impacted their mental health, according to LifeWorks Inc.’s latest mental-health...

While politics plays a role in most investment decisions, it tends to arise on a fairly localized basis, says Michael Craig, head of the asset...

The Association of Canadian Pension Management is calling on the Office of the Superintendent of Financial Institutions to provide more detail on how pension plans...

While most U.S. employers have committed to diversity, equity and inclusion and accessibility initiatives, the majority haven’t embedded these initiatives into their daily processes, according to...