Alain Malaket has a nuanced perspective on risk — one informed by his experiences as a third-party administrator, pension regulator, consultant, pension plan director and motorcyclist.

It’s a lesson he’s learned firsthand. At 14, he didn’t consider the long-term implications of trying a friend’s dirt bike, but motorcycling still has him in its thrall. “I try not to look at the actuarial tables in relation to riding, but it’s taught me something about risk awareness.”

The lesson was reiterated during the late 1980s, when Malaket was an analyst at a third-party pension administrator. “From that early age, I learned there are people behind the numbers we talk about.”

Getting to know
Alain Malaket

What keeps him up at night:
The regulatory risks facing target-benefit plans and raising awareness about the advantages the model offers to plan sponsors and members

Outside the office he can be found:
Driving his daughters somewhere, golfing or on his motorcycle — a Victory Eight Ball

After a few years as a consultant, he landed a job as corporate pension manager at George Weston Ltd., Loblaw Inc.’s parent company and one of the largest private sector employers in Canada with more than 15 pension program.

In 2015, Malaket joined InBenefits, a non-profit organization providing administration and investment management services to two large target-benefit plans. Under these pensions, plan sponsors’ contributions are based on negotiated rates. Unlike traditional defined benefit plans, boards can vote to reduce benefits, though this hasn’t happened with InBenefits’ plans.

“It’s a win-win-win. From an employer perspective, the cost of offering these benefits could otherwise be prohibitive and the target-benefit plan reduces employer financial and fiduciary risk. From a member perspective, they benefit from the power of pooling, which reduces their longevity and market risks, receiving a more stable benefit than a typical defined contribution or group [registered retirement savings plan]. From the unions’ perspectives, it lets them secure new benefits for members.”

The concerns of union officials are particularly relevant to InBenefits, since its largest plan sponsor client, the $2.6 billion Nursing Homes and Related Industries Pension Plan, is jointly sponsored by the Canadian Union of Public Employees, the Ontario Nurses’ Association, the Service Employees International Union and Unifor. It’s second largest client, the Multi-Sector Pension Plan, is sponsored by the CUPE.

“The creation of the NHRIPP has meant so much for our care workers,” he says. “Before it, some were retiring on nothing but accrued sick days. Now, many are receiving $1,000 a month.” 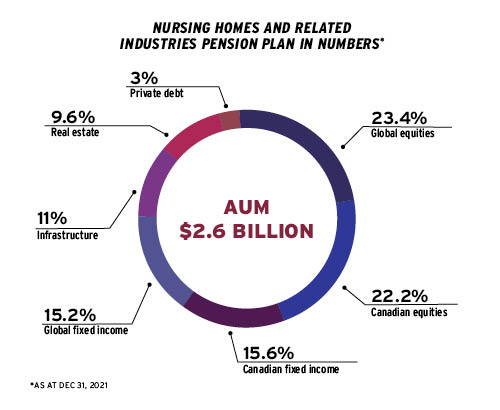 During his tenure, InBenefits worked with a third-party provider to build a customized pension administration solution. It also set about diversifying its approach to investing. “We’re involved in real estate, private debt and infrastructure. Climate is one area both boards are looking at. . . . It’s a criteria we assess investment managers on, but it’s not used as a primary filter.”

Going forward, Malaket is eager for InBenefits to showcase the benefits of TB pensions. “I understand why so many employers moved away from DB plans. I’ve seen contribution rates triple in a single year. But DC plans put the onus on members to look after all their investment decisions.”

Read: Are target-benefit pension plans the answer to a secure, sustainable retirement?

One challenge he’s working to overcome is the regulatory environment for TB plans. “A rule prevented [the pensions of non-profit organizations] from accounting for more than 10 per cent of a TB pension. In speaking with the regulators, this seems to have just been meant to prevent big public sector plans from joining them. . . . We’re looking at getting the definition reviewed.”

With both the NHRIPP and the MSPP based in Ontario, Malaket is also concerned about how the province will review its provisions for adverse deviation rules. “If that gets set too high, it will have an adverse impact, forcing [TB] plans to cut pension accrual formulas. . . . A lot of industry groups have come together to contest this and the province seems to be listening. It’s one of our concerns that’s on the horizon.”