When the federal government signed the Cannabis Act into law in 2018, legalizing recreational cannabis, it also committed to providing patients with better access to medical cannabis and to more extensively researching the trends, use patterns, patient impact, potential therapeutic treatments and adverse effects of cannabis and cannabinoids.

The legislation also prompted new conversations in the workplace, touching on everything from safety measures to cost benefits to therapeutic evidence.

This summer, Benefits Canada hosted a roundtable where seven plan sponsors discussed their coverage policies, as well as the considerations and challenges around making medical cannabis more widely accessible.

Since recreational cannabis was legalized in October 2018, employers have had a busy year reviewing and revising their policies and procedures — and, in some cases, building new ones — to address cannabis in the workplace. In terms of medical cannabis, health-care spending accounts are the most common avenue for employees accessing the drug, according to the roundtable participants.

About 3,000 of Hamilton Health Sciences Corp.’s 13,000 employees are covered for medical cannabis through its health-care spending account. As in many unionized environments, a policy grievance prompted the organization to look into the option more closely, says Carolyn Ferrante, senior employee and labour relations specialist.

However, when the company investigated adding medical cannabis through its benefits provider, it learned the drug would only be covered under certain requirements, says Sinisa Medic, manager of human resources reporting, compensation and benefits. “The costs were too high for our benefits plans and our funding is tight. It’s hard to go forward with something that’s an unknown.”

Carey Uyeda, compensation and benefits manager at Niagara Casinos, says the organization doesn’t currently offer medical cannabis as a benefit. While it does offer coverage through its health-care spending account, the percentage of employees with the option to purchase it is very low. “We have a small, unionized group,” he says. “While we haven’t had any union activity in grievance, we’ve had a lot of people calling to ask if it’s covered and how much is covered. [At this time], our answer is no. But coming here today may make me look into more of its potential usage, so it’s always an option to consider.”

While EY’s health-care spending account has covered medical cannabis for several years, it added the option to its benefits plan on Jan. 1, 2019, for three pre-conditions: multiple sclerosis, chronic neuropathic pain and as a cancer treatment. “Within six months, we’ve had four claims, but as of yet none have been paid,” says Kimberly Allen, EY’s total rewards leader.

The LFL Group, which owns Leon’s and the Brick, recently revamped its benefits plan, adding a number of services for its employees. And while it does offer a health-care spending account, given all of the recent changes it has made to its plan, “we didn’t feel it was the right time to think about cannabis,” says Jackie Chavarie, the company’s HR development manager.

In 2017, prior to the legalization of recreational cannabis, Health Canada conducted a substantial survey on the topic. In terms of medical cannabis, it found:

12%
of respondents use cannabis for medical purposes.

97%
of those respondents found symptom relief by using medical cannabis.

72%
of this group decreased their use of other medications, which often included opioids.

For the Co-operators Group Ltd., medical cannabis coverage falls under its health-care spending account, provided it meets the associated criteria, but it isn’t offered as a separate add-on, says Lisa Dearling, manager of benefits, wellness and recognition. “As an employer, we really haven’t had anybody asking for it, so we’re OK to wait for the moment. However, as a group benefits carrier, the Co-operators does offer plan sponsors the option to include it as part of their extended health-care plan, again with certain criteria.”

Wendy Leung, senior manager of pension and benefits at Ontario Power Generation, says the organization’s benefits plan doesn’t currently cover medical cannabis. “We’re interested in seeing if we were to set up a HCSA, under what conditions would we cover [medical cannabis] and the mechanics of it.”

At Husky Energy Inc., medical cannabis isn’t eligible under its benefits plan. “Last year, I think we had two claimants to our health-care spending account and the amounts were pretty low [under $500],” says Steve Sproule, team lead for health, benefits and retirement. “To my knowledge, there hasn’t been a lot of requests or inquiries about covering it. Our employees aren’t shy and we have processes in place for discussions. They would speak up.”

Although employers consider a range of factors when adding any product to their benefits plans, workplace safety, the cost benefit of a drug and its therapeutic evidence are all top of mind. According to the roundtable participants, this is no different when they consider adding or extending medical cannabis as a treatment option.

For OPG, first and foremost is workplace safety. “We run a nuclear facility and therefore have a very stringent fitness-for-duty program, which will include drug and alcohol testing,” says Danielle Kristensen, the organization’s senior manager of labour relations.

Sproule echoes this position. “Being an energy company, safety is critical for us. Most of the energy that Husky has put into [addressing medical cannabis] is the same as for alcohol and drugs, and how we’ll manage cannabis outside of the plan now that it’s been decriminalized.”

At the LFL Group, employee well-being also tops the list. “It’s really about safety, as we have drivers lifting furniture all of the time,” says Chavarie. “Obviously, legislation overrides everything else, but safety is one of our serious concerns.”

For many employers, it comes down to whether a product has a drug identification number. “We’ve always gone by the condition where, if a product does not have a DIN, we don’t cover it,” says Leung. “We have to educate our employees about what Health Canada has approved medical cannabis for, to make sure our employees understand what that means.”

Alongside a DIN, the roundtable participants noted the need for more therapeutic evidence of medical cannabis’ usage, effects and risks. “I think, if it was assigned a DIN, it’d be a different story,” says Dearling. “For us to add it, we would need a lot more information around dosing, more rigor around the structure and data from clinical trials and advocacy-based studies. I would want to see usage patterns and the like.”

A future without stigma

As the roundtable participants wait for the data required to make informed decisions, they’re continuing to discuss how medical cannabis is addressed in their workplaces. This has led to some interesting questions and insights on the stigma that continues to surround cannabis, despite its longstanding use and designation as a therapeutic option.

“One of the biggest challenges we have is we don’t have enough data,” says Dearling. “And maybe it’s because of the stigma around it. Our younger demographic may be more open to cannabis as a treatment option and aware of it. But [for others], there’s still a lot of stigma, [which requires] a lot of education and breaking of barriers to even ask for it.”

Read: Editorial: To be blunt: It’s time to embrace the benefits of marijuana

Leung agrees. “In addition to [better understanding] stigma is education, and having awareness around the usage and what it really means.”

“We talk about big pharma and all the rigour that goes into making a drug, taking a drug to market, the tests that come with it and then the marketing of it,” says Sproule. “Maybe that’s where the needle has to move to remove the stigma [from medical cannabis] and make plan sponsors feel more comfortable about the efficacy in the clinical trials. That tends to happen with pharma, but I don’t think we’re there yet with cannabis.”

Moving forward, the roundtable participants say they’re hopeful of reaching a point where there’s a clear delineation in everyone’s minds between recreational and medical cannabis, and also “being able to say clearly, ‘Here’s a capsule and this is the ingredient in it,’” says Kristensen.

In the meantime, the LFL Group is planning to keep conversations alive in its organization among executives, employees and its benefits carrier. “I think all of these partners need to come together to make the decision two years, three years, five years from now, whatever that looks like, when that evidence is available and the cost benefits have been decided,” says Chavarie.

Read: A roundup of benefits, HR and legal considerations around legalized marijuana

“I think the most important thing is staying current, keeping the dialogue going, the learning,” adds Sproule. “I know medical cannabis has been around for a while, but it feels like it’s really picking up and there’s going to be a lot of developments in the days to come. I want to be prepared when they do.” 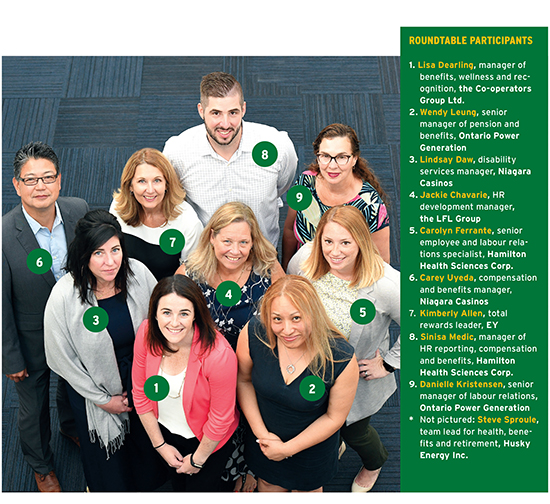 Groundhog Day: Survey finds 35% of employees say every workday is the same