Many employees in the non-profit sector dedicate their lives to helping others. In 2008, a new pension plan was launched to help provide them with a lifetime benefit upon retirement.

Michel Lizée, now an independent trustee and pension committee secretary for the Régime de retraite des groupes communautaires et de femmes — or the Community and Women’s Groups Member Funded Pension Plan — was working at the Université du Québec à Montréal supporting community groups on various projects in the 2000s and helped set up a working group to discuss designing and introducing a pension plan for the sector.

Around the same time, the Quebec government brought in new regulations to allow for member-funded pension plans, which would take funding risk off of employers’ shoulders.

“Essentially, it’s a defined benefit plan, but with the notion that the employer contribution is fixed,” says Lizée, noting higher contributions cover both guaranteed benefits and future indexation, which is conditional on the plan’s financial situation.

The working group started its discussions in 2004, with the Community and Women’s Groups Member Funded Pension Plan ultimately launching in October 2008. While introducing a plan in the midst of a financial crisis was less than ideal, it required employers with at least 800 employees to commit before it could begin and the timing was merely coincidental. But it worked out, says Lizée, because the pension was introduced at the bottom of the markets and benefited from the subsequent market upswing.

Getting to know
Michel Lizée

Today, the plan covers 828 different community groups and has 8,800 participants. Before 2017, the plan’s assets were managed on an insurance platform because of their limited size. However, it wanted more access to alternatives and to pool assets to gain a critical mass, he says.

Read: Sounding Board: Ontario Pension Board makes the case for asset pooling

That led to the idea to start a master trust with other pension plans called the Fiducie globale des régimes de retraite à risques partagés. It was set up by a third-party actuarial company with an overarching investment committee, while each plan sets its own asset allocation and rebalancing rules.

The master trust currently includes 12 pension plans from various sectors, all of which have a risk-sharing component with plan members. And more pension plans are continuing to join.

Membership in the trust has opened up many possibilities for the plan because it now has access to a broader range of managers and its assets are pooled with other pension funds, totalling more than $600 million as of June 30, 2020.

“The main benefit is a much wider opportunity set of funds that we can choose or even contribute to [designing],” says Lizée. “That, to us, was the key [to] enhancing our investment policy. Even though I don’t have the size to dream about it, I’m a strong believer in the Canadian model. I think it’s the one that makes sense. 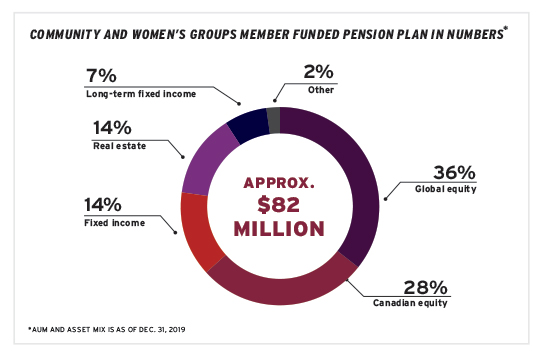 “However, if you’re small, the cost of [private] assets is ridiculous and so you need to find ways to tame the costs. And so a master trust is a way that you begin to have a size that is just enough to at least start negotiating management fees.”

Read: The case for investing in global infrastructure

Generally speaking, results have been strong since switching to the master trust model. And the plan is continuing to update its investments. For example, in June, it decided to invest in global infrastructure for the first time, targeting a 15 per cent allocation by 2024.

“The choice is to have a combination of private assets, both real estate and global infrastructure, to move away from the immediate volatility of listed assets, but mostly to [hopefully] gain benefits from diversification.”

Yaelle Gang is the former editor of the Canadian Investment Review.

The uniting theme at the 2022 Defined Contribution Plan Summit was financial wellness, a chief concern for any employer that offers a pension plan to...

Nearly a third (30 per cent) of insurers are making changes to ensure there’s diversity among the medical providers within their networks, according to a...

In the midst of historically high inflation and ahead of a possible recession, it’s important for employers to offer benefits like financial counselling and flexible spending...

There’s no question that Canadians value their private health benefits, even with pharmacare discussions back on the table. In a recent Abacus Data study, 78...

The Caisse de dépôt et placement du Québec is leading a funding round for a customer engagement software provider. During a US$105 million investment round...