In 2016, the Calgary Foundation launched an impact investment program — one that required as much creativity as financial acumen to design.

Perhaps that’s why the job fell to Lauren Frosst, director of investments at the endowment fund, which provided $66.9 million in funding to 1,100 charitable organizations last year. Beyond her experience designing a diverse array of funding programs, including grants, crowdfunding and lending, she’s also an artist. “I have formal training in both traditional printmaking techniques [and] asset value methodologies. It’s an unusual combination of skills.”

In late 2015, when Frosst was a program development associate with the charity and also pursuing a master’s degree in business administration at the University of Calgary, Dan Langlois, the Calgary Foundation’s vice-president and chief investment officer, greenlit the idea of an impact investment framework. “He immediately said, ‘Let’s do it.’ What I didn’t know was there was this real desire to find new ways to make use of those investable dollars for social good while still compensating the foundation.”

Getting to know
Lauren Frosst


Job title:
Director of investments at the Calgary Foundation

What keeps her up at night:
Thinking of innovative uses of capital to solve some of the world’s most pressing issues.

Outside the office she can be found:
Riding her bike, reading, swimming and camping, serving on the board of arts-based non-profits and spending time with her daughter

Frosst settled on a strategy that would offer loans to charities and non-profits pursuing projects in line with the foundation’s own mandate. Applications would be judged based on the organizations’ track records in completing similar projects and proposed repayment plans.

“Credit capacity and analysis are important to the program,” she says. “The capital provided is meant to augment other funding sources — to either accelerate or grow social initiatives sustainably while compensating the program for any investment risks it’s taking.”

The program would provide loans to organizations that wouldn’t otherwise have access to credit through the existing financial ecosystem. While it wouldn’t compete with banks, the foundation could rely on its insider knowledge of Calgary’s charitable ecosystem to back projects other creditors couldn’t.

“We created an internal rate model, which we use to create consistency across deals. It’s similar to what you’d get from a bank, but we can do a few things differently. We can charge for periods of interest only and accept choppy repayments — $100,000 here, $80,000 there.”

Read: A look at the Pension Plan of the United Church of Canada’s efforts to be a good shepherd of capital

To secure support from its board, the Calgary Foundation piloted the program with a loan to support the creation of shared workspaces for artists. After its completion, the board gave the program its stamp of approval — and a $20 million allocation.

To date, the program has supported 16 different projects, seven of which have already been fully repaid, including a non-profit that received a $175,000 loan that allowed it to develop software to help people on the autism spectrum live independent lives. “The organization had already received government approval for a grant, but it wouldn’t receive the funds until work had started,” says Frosst.

“In 2020, we had allocated almost all of our $20 million and the board decided it would be a good idea to expand the program by an additional $8 million. Though, with the [coronavirus] pandemic, things started to slow down. We still haven’t reached our full allocation.” 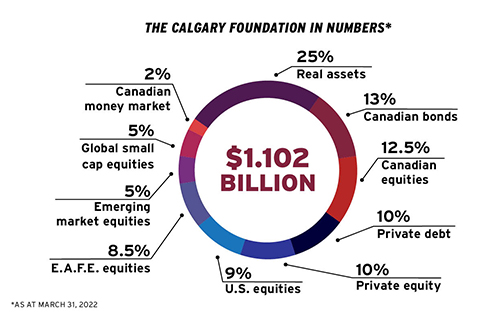 The pandemic caused other challenges, including leaving many of the Calgary Foundation’s recipient organizations unable to generate funds in a traditional way — and to repay loans. “In some cases, we provided interest-free deferrals to some organizations,” says Frosst. “That took away from our returns, but we did manage to stay on top of inflation, generating about three per cent per year through it.”

She believes more traditional investment funds can still earn a great deal from the success of the impact investing program. “A pension fund’s strategy is very different, but there is a move toward environmental, social and governance issues and to diversity, equity and inclusion issues. In terms of reducing liability, there’s value in being a good steward of capital.”

How the CMPA looks at investments through a total portfolio lens

Defined contribution pension plan members in the U.S. are committed to saving and investing, as only two per cent stopped contributing to their plan in...

A survey on employee attitudes towards remote working was the most-read story on BenefitsCanada.com over the last week. Here are the five most popular news stories...

Why should defined benefit pension plans invest in Canadian equity markets at all? It’s a question many DB plan sponsors began asking themselves in the...

Efforts by central banks to reduce inflation could spark a global recession, according to a new report from the World Bank. “If the degree of...

Head to head: Is flexibility the key to preventing women from leaving the workforce?

Flexibility only goes so far, say two experts, and covers a small part of a healthy and respectful work culture. Tracy Fogale, senior manager of...

Almost half of benefits plan members reporting good overall health in the past year: survey

Nearly half (47 per cent) of Canadian benefits plan members say their health was generally excellent or very good in the past year, up from...

The Healthcare of Ontario Pension Plan’s subsidiary HOOPP Realty Inc. is selling a portfolio of industrial properties to a real estate investment trust. Under the...