In the vast majority of Canadian medical malpractice lawsuits, doctors’ legal defences and patients’ settlements are paid by the Canadian Medical Protective Association, an organization representing more than 105,000 physicians.

“It’s a non-profit mutual defence organization, not an insurer. From an investment perspective, this allows more flexibility as the asset mix is not determined by a regulator,” says Josée Mondoux, the CMPA’s chief investment officer.

Since complications from surgeries aren’t always immediately noticed, patients sometimes launch lawsuits many years after the precipitating medical care, which limits the ability to apply an asset-liability matching approach, a marked distinction between endowment fund and pension plan investing, she says. “Negligent care payments aren’t indexed to sovereign bonds, which would simplify the [asset-liability matching] process. Starting in the 1980s, the CMPA faced increased volatility in payments year over year. The association’s approach was to move from a pay-as-you-go to a fully-funded organization.”

The CMPA’s reserve for claims had grown to $2 billion by 2000, at which point its chief financial officer decided it was time to start investing its assets in house and Mondoux was hired. “The team was built up gradually. I was the first investment professional hired, initially as an analyst. I’m now looking at hiring our 21st.”

She’s grateful she works in an industry more interested in results than in intangible qualities sometimes cited in awkward conversations between hiring managers and women who’ve been passed over for promotion. “Our industry is merit-based. If you go in with intellectual curiosity and a strong work ethic, you should be rewarded.” 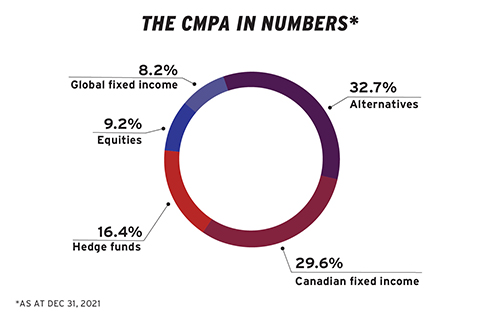 To be able to provide enough of a return to prevent members from bearing increasingly expensive fees, Mondoux’s team has developed its own approach to investing. “While I tend to think of pension plan sponsors as my peers, our tax consequences aren’t the same, nor our liabilities. Because we can use leverage, we are currently about 20 to 30 per cent levered.”

The CMPA’s asset mix is designed to maximize absolute returns without taking on undue risk. “We have a lot of alternatives in our portfolio. We target private equity, debt and real assets. We also put roughly 20 per cent in hedge funds.”

Read: A look at the Calgary Foundation’s creative approach to impact investing

Getting to know
Josée Mondoux

What keeps her up at night:
Not the day-to-day movement of markets, but the major geopolitical and societal issues that shape them in the long term

Outside the office she can be found:
In nature, whatever the season, unless stuck on a video call

In 2013, the fund made a contrarian decision Mondoux feels is typical of the team. To serve as a hedge against inflation, it invested in shipping containers. “When we began investing, daily charter rates were between $10,000 and $20,000 per day. When the coronavirus pandemic hit, they jumped to $100,000. The idea went from looking like a real dud to a real winner.”

The adoption of two strategies in 2020 sets the team’s work apart from other institutional investors, she says. “We look at investments through a total portfolio lens and have an established risk budgeting philosophy.”

Where investors usually set targets for individual asset classes, those working under the total portfolio model adopt a less compartmentalized approach. “It lets us consider our options and prevents us from working in silos. Because we’re working toward a common target, our team is willing to allocate between groups. The public team has to be flexible, nimble and adaptive — and you need a culture that appreciates this.”

Allocations are made according to a desired risk level — or target — rather than focusing on percentage over and under weights. At the CMPA, bonuses are based on improving Sharpe ratios rather than purely on a return basis. “While pension investors aren’t usually familiar with the approach, banks use it all the time. I have found that it makes investment decision-making easier, removing the need to time the market.”

Two decades after joining the association, Mondoux says her biggest lesson has been learning to accept her own imperfections. “I learned a lot from others.”

Fortunately for her, the CMPA and Canada’s medical professionals, one of her board members was Gordon Thiessen, former governor of the Bank of Canada. “He said, ‘I knew success would be difficult if everyone always agreed with me. The trick is making sure you’re surrounded by professionals comfortable dissenting,’” she says.“I am proud to say that no one on my team is afraid to tell me when they disagree with me.”

The Investment Management Corp. of Ontario is investing US$450 million in a digital infrastructure provider. DataBank Ltd. operates a portfolio of 74 data centres in France,...

The real estate arm of the Ontario Teachers’ Pension Plan is appointing Julian Neave as the director of its London office. As the first director...

Global institutional investors are overlooking climate-related opportunities in Africa, according to a new report by independent non-profit research group the Climate Policy Initiative. “The private...

Coverage of the 2022 Risk Management Conference

In 2022, normal was supposed to make a comeback — it didn’t. Just as supply chains began to stabilize, war broke out in Europe, China...

Employers with a workplace culture that promotes employee recognition and connection have more productive and engaged workers, according to a new survey by Workhuman and Gallup...

The technology company’s senior benefits consultant on employee well-being, the importance of diversity, equity and inclusion and bikes races in Western Canada. Q: What top...