How can employers better address conditions, such as migraines, that are among the factors contributing to illness and absenteeism?

With rates of illness and disability on the rise, absenteeism is a significant and growing concern for Canadian employers.

Statistics Canada figures for 2017 show rates of absenteeism have been on an upswing in recent years, with the number of days lost per full-time worker due to illness or disability reaching eight days last year. That was up from 7.4 days in 2013.

But what are some of the major causes of absences? Not surprisingly, mental-health issues and chronic diseases remain significant factors. “I think, of course, over the last few years, mental illness in terms of short-term disability, has been a huge driver of claims,” says Judith Plotkin, vice-president of growth and strategy at ReedGroup.

“But certainly, chronic diseases like [musculoskeletal disorders] . . . cancer, cardiovascular disease, arthritis, diabetes, that cluster is really important as well,” she adds. “In the short-term disability, it is mostly adjustment disorders, so those would be situational depressions where people are having a difficult time, usually triggered by a significant life event.”

What about the impact of less-discussed health issues, such as migraines? Dr. Christine Lay, director of the Centre for Headache at Women’s College Hospital in Toronto, notes the significant impact of migraines in term of absenteeism, presenteeism and health-care costs. “A migraineur who’s not treated well can lose up to 44 days a year, either in absenteeism or presenteeism. [It’s] significantly disabling.”

Recommendations from the Migraine Trust, a Britain-based organization, suggest government-led support and incentives for employers to provide flexible working programs to help staff suffering from fluctuating and episodic migraines. For her part, Lay suggests offering educational sessions at the corporate level. Her educational program, which deals with lifestyle management factors and other ways of mitigating migraines, has shown a reduction of 50 per cent in emergency room visits, as well as decreases in medication use, absenteeism and presenteeism.

“So yes, while workplaces should be aware of migraine, be more accommodating — perhaps adjust lighting because you know fluorescent lighting triggers a headache or provide a migraine employee with a quieter space rather than a big open cubicle — I happen to think one of the greatest changes we can make is simply around education,” she says. 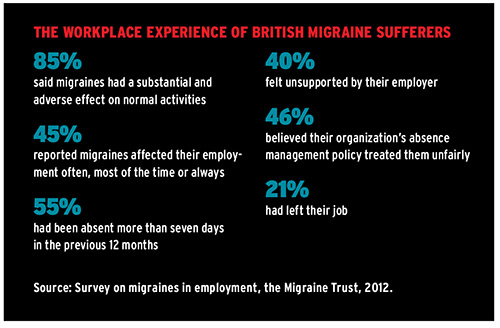 “Teaching employers and employees what it is and how to manage it [helps], because we know when migraine patients manage more effectively . . . absenteeism and disability drop way down.”

Lay notes about 12 per cent of the population suffers from migraines. She adds, however, that the statistic only reflects diagnosed cases.

In her view, employers have a long way to go in recognizing and understanding migraines. “If you have anybody at your company that’s got a hearing problem or low iron, [I] guarantee you there’s migraine because it’s the third-most prevalent [condition] worldwide,” says Lay, referring to two of the other most common health issues. “So they really have to make adjustments, whether people can work from home or [in a] different physical environment, different shift hours, that kind of thing.”

In addressing the more talked-about issue of mental health, Angelo Carofano, vice-president of finance and administration at Workplace Medical Corp., has found the answer often lies within the workplace.

“The worst thing you can do with people with mental-health conditions is think that they’re going to recover within their four walls at home,” he says.

Read: Drug Plan Trends Report: A snapshot of what’s coming down the pike

Conor Quinn, vice-president of group benefits at the Co-operators Life Insurance Co., agrees, noting the workplace should be a pathway to good mental health. “And so that [discussion] about reducing absenteeism, the duration of absenteeism, incidence of absenteeism, what we’re really trying to do is identify strategies in aggregate to help make that vision a reality.”

Ryan Murphy is an associate editor at Benefits Canada.

Inflation break-evens at multi-year highs and higher nominal yields are putting some upward pressure on real yields in Canada, according to a new report by...

A first-quarter rally in both the equity markets and bond yields have propelled defined benefit pensions to their best funded positions in more than a...

A recent ruling on federal carbon pricing sparked a lot of loud talk on both sides of the aisle, but the impact on institutional investors...

Specialty drugs can significantly improve (or even save) an employee’s life, but can come at a high cost. Over the past few decades, many employers...